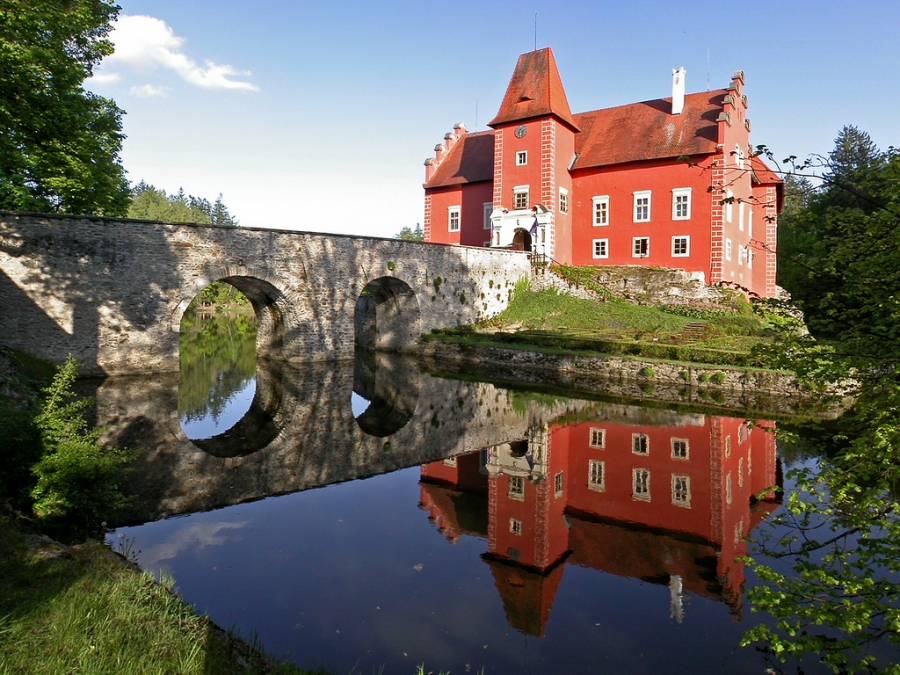 Guide
,
Czech Republic
,
South Bohemian Region (Jihocesky Kraj)
One of the most charmingly situated monuments, set in the romantic scenery of Bohemia is the South Bohemian water castle Červená Lhota. It is located on a rock, which was turned into a small island by damming up the valley and raising the level of the surrounding pond. The yeoman`s stronghold was bought by Jan Kába of Rybňany in 1530 and soon after rebuilt it as a Renaissance manor.

The Červená (Red) Lhota Chateau is located in the south of Bohemia, about 20 kilometers from Jindřichův Hradec and was built on a solid rock island found in a lake. The chateau is accessible over the stone bridge connecting the island and embankment.

The Červená Lhota Chateau is one of the most visited chateaus and castles in the Czech Republic. In recent years, there have been about 120,000 visitors who actually saw the interiors of the chateau and another 80,000 visitors who have not been inside but stayed in the vicinity.

The red color is not original. The color of the paint on the facade is explained in several popular stories. One tells a story about a beautiful Lady taken away by the Devil. Only Lady’s blood stains left on the white walls of the chateau gave evidence of her gruesome end. The body was never found and the indelible stains inspired later chateau’s owners to have it decorated in red. In fact, the structure used to be white originally, it only became red at the start of the 17th century.

The oldest piece of paper to bear the name Červená Lhota dates back to 1465. Between 1542 – 1555, the original Gothic fortress was rebuilt and turned into a Renaissance chateau.
The said written documents speak about Nová (New) Lhota. Between 1658 and 1678, the Chateau saw more renovations and some Baroque amendments were introduced alongside with new interior designs provided by Italian artists. Before 1835, when Jindřich Eduard Schönburg – Hartenstein became the chateau’s owner, the building had belonged to many families. Between 1841 – 1863, Jindřich had the Chateau rebuilt in romantic New-Gothic style with a lot of amendments made in the interiors, too. In 1900, the Červená Lhota Chateau was inherited by his youngest son called Jan, who the Austrian-Hungarian Ambassador in Vatican. He, obviously inspired by his stay in Italy, reintroduced Renaissance in the amendments made. In 1945, the Chateau was confiscated on the basis of the Beneš Decrees and the following year saw a children’s rehabilitation clinic opened in it. In May 1947, the National Cultural Commission took control of the Chateau which was opened to the public in 1949. Since Beneš Decrees are untouchable, the Chateau can’t be given back to its original proprietors.

The Chateau has also a park highly acclaimed by botanists in which you will find a chapel, an inseparable part of the Chateau.

Today, the state-owned Červená Lhota Chateau is part of the National Cultural Heritage and falls under the authority of the National Institute for the Protection and Conservation of Monuments and Sites.