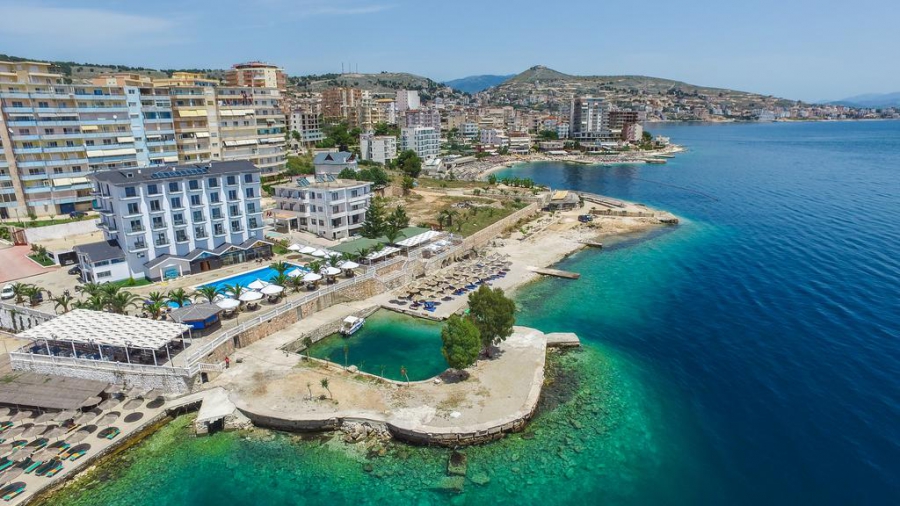 Saranda is situated in the southern of Albania and has a stunning coastline in front of the Ionian Sea. Located in the southern of Albania and surrounded by crystal clear waters of Ionian Sea, Saranda is one of the most visited cities during summer. The city’s architecture style resembles with an amphitheater with three parallel roads. Four roads with stairs connect the city hill with the promenades along the coastline.

Legends say that in the ancient times, the city was named Onchesmus but the current name of it according to the Albanian writer and historian Neritan Ceka comes from an unfortunate occurrence in the 15th century in the city. 40 Christian monks and soldiers were killed from the Ottoman Army because they did not obey the order to convert into the Muslim religion. After their murder, the locals and the church of the town promulgated them saints. In the Greek language “Agii” means saint and “Saranda” means forty. After a while, the city was called only “forty” – Saranda.

Legends about the history of the city say that the inhabitants of the ancient Saranda where the descendants of the Greek hero, Achilles. They also say that in the 12th BC century the son of King Priam of Troyes, Helen took a trip with the aim to invade western lands and after a while he landed in Corfu Island and there he decided to sacrifice a bull to honor Apollo, the King of Olympus Mount.

During the sacrifice ceremony, the bull got injured but Helen couldn’t kill it and the bull tried to run but died after a while. Helen followed the bull and thought this occurrence was a sign from Apollo. Later, he built a small city in miniature, similar to Troyes and named it “Vouthrotos” which in the ancient Greek means “wounded bull”.  This city in miniature nowadays is known as Butrint Ancient Park, situated only 26 km from Saranda city.

A visit to the ancient city of Butrint is another must when travelling in the vicinity of Saranda. Butrint is described as a microcosm of European history since it exhibits remains from most major empires of the area, including Greek, Roman, Byzantine, and Ottoman ruins. Information about the city is well-presented in English and Albanian brochures which are distributed at the entrance, also each important site has a sign with historical facts and dates in order to help visitors understand what they are seeing.

Interesting things to see in Butrint include the Greek amphitheatre (later remodeled by the Romans), the baptistry, the cathedral, the lion’s gate, and the museum which includes many interesting artifacts found in the area.

Butrint is one of several places in Albania which was kept off-limits to the general public during the Communist Era. The city was made into a tourist destination for foreigners to visit, but Albanian citizens were not allowed due to fears that they would try to escape by swimming the short distance to Greece.