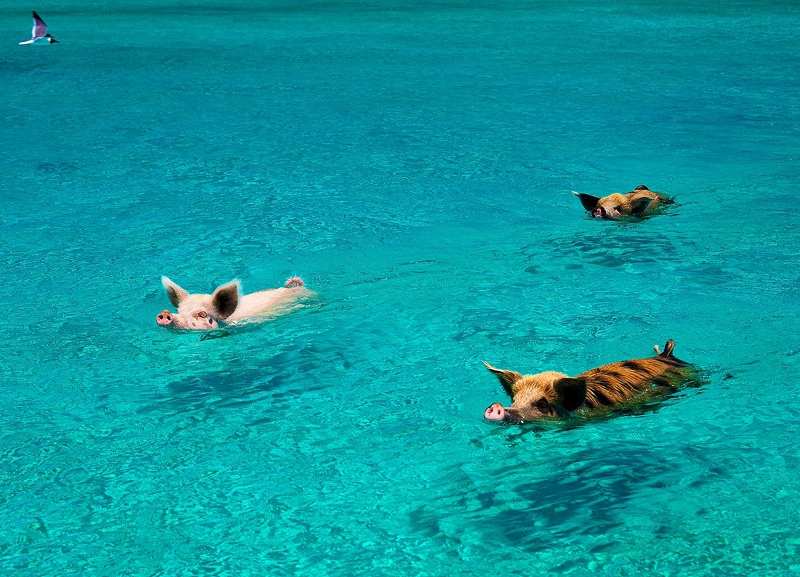 Guide
,
Bahamas
Big Major Cay in the Bahamas is a small, uninhabited island and very popular anchorage. The Exuma Banks side of the island has two beautiful beaches, one of which is home to one of the most famous attractions in the area - swimming pigs.

Nobody is sure how the pigs ended up in an island in the middle of the sea, but it’s generally believed that they were left there by passing sailors who may have brought them as a food source. However, the sailors never returned and the lucky pigs rather than end up as bacon found themselves a home.

Finding food has never been a problem. Over the years local yachts and sailboat cruisers brought their scraps and leftovers to the beach so the pigs could feed. The clever pigs have also worked out that the crews of passing yachts regularly dump excess food into the sea. Today the beach is a popular tourist attraction and whether or not they remember to bring their swimming gear, the tourist will always bring food. The hungry pigs eagerly plunge into the waves when they see a yacht and will swim a few hundred feet up to the vessel in the hope of a free meal.

The pigs are so successful in their enterprise that they are now living the dream by raising their family of eight on a tropical island in the Caribbean with nothing to do but eat, sleep and swim.