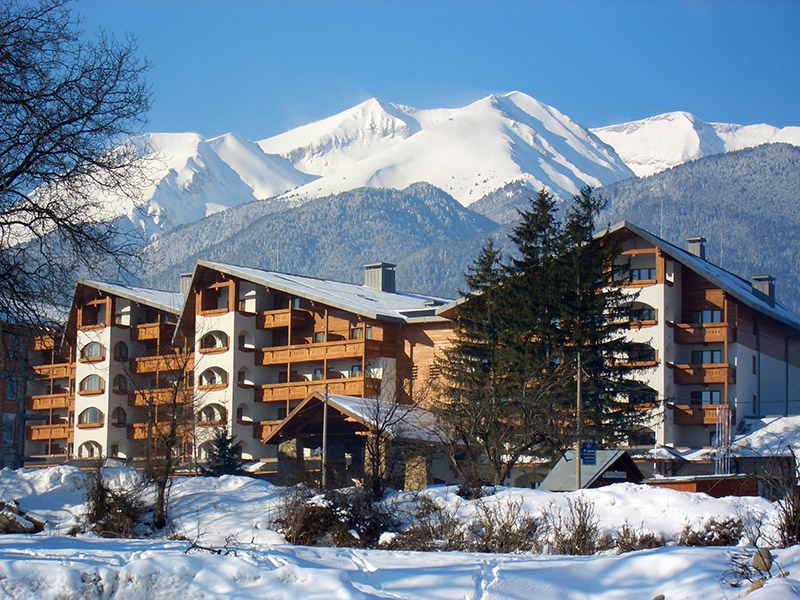 The mountain town, which is preserved to this day is the spirit of the Revival period and has become one of Europe`s largest ski Holidays in recent years. Bansko still keeps its old history, cobbled streets and stone houses with high gates and long black fir beams with thick stone walls. Bansko has suggested its own authenticity in architecture, customs and way of life which has been saved through the centuries. The spirit of the past has moved the town into Bansko , not only it was but still is till today a cultural and spiritual center.

Passing on the quiet streets of Bansko , you can feel the greatness of the Pirin mountains spread throughout the city. Everyone who has visited Bansko returns again and again in the heart of the Pirin.

Bansko is not just a winter resort, but also offers Thai beauty during each season of the year. Numerous small and lively pubs offer a variety of specialties from the Bulgarian and international cuisine. Domestic small family hotels in Bansko, luxury hotels, clubs and facilities make the stay for everyone in Bansko an incredible experience.

The beauty of the Pirin doubles it visitors for Bansko with guests from Bulgaria and all over the world. Besides the magnificent Pirin and the numerous natural settings, Bansko is rich with its historical heritage. Along with the many establishments in Bansko one area is enriched with the stunning church, Holy Trinity.

Bansko , Dobrinishte and Yakoruda have many beautiful sites in Bulgaria.

Built in the distant year of 1835 Holy Trinity Church in Bansko became the second largest church in Bulgaria. Holy Trinity one one of the largest basilica church`s without a dome was built in the Bulgarian lands during the Ottoman rule. In the churchyard to this day it stands 30 meters high with a clock tower and was built more than 150 years ago.

The unique atmosphere created by the historic, cultural and architectural heritage of the Bulgarians, incredible cuisine, numerous leisure facilities, modern ski slopes, beautiful scenery and fresh air are all part of Bansko .

Many fans of winter sports choose Bansko for their vacation. Foreigners are attracted to Bansko not only because of the opportunity to ski. Pirin Mountain offers many other activities such as golf, tennis and fishing. The town has attracted many investors in recent years. By continuously improving ski facilities and infrastructure Bansko yielded nothing in the most modern ski resorts in the world. In cases where there is not enough snow in the Bansko ski area they operate more than 180 artificial snow cannons. Artificial snow is used in Bansko and allows early detection of the ski season, and extension of the season until mid-April. All tourists are delighted with the rapid progress of Bansko as a winter resort. High in the Pirin slopes there are perfectly maintained modern facilities.


In 2006 the famous newspaper The Guardian ranks Bansko in 6th place among the world`s winter resorts. The Guardian lists the treasures for lovers of skiing, which are popular and most suitable for this winter sport. According to the The Guardian, one comments that many are taking advantage of Bulgaria`s ski resort Bansko , indicating the low prices and beautiful nature. Heavy snow is one of the other advantages of Bansko in the choice of the rest among the winter resorts.

This year Bansko hosted three rounds of World Cup competitions for women. In subsequent years Bansko will again take the World Cup races for women and even an application to host the European Cup for men. Recognition to Bansko by the International Ski Federation is tremendous.

Properties in Bansko are of different values, starting from simple studios and apartments and get to the luxuriously furnished holiday apartments in modern spa centers.

Bansko people do not sit with folded arms through the summer. They are aware that Bansko should become a resort for every season.

Summer Bansko is changed with bagpipes and jazz. We organize several events such as summer theater festivals, Jazz Fest, Pirin songs with the Festival Between Three Rivers and many others who for years have attracted thousands of visitors. Each year during the Beer Festival the location tightens as the tents area is 300 square meters with over 500 locations. Another summer theater festival this year will be filling the tourists in the town. For the first time Bansko in 2008 took the idea of actress Nona Iotova and so was organized the Theatrical Festival.

All people eagerly await the traditional Bansko Jazz Festival in August. Summer will not pass without a Macedonian song during the Festival Pirin Folk.

The cool weather, the beauty of Pirin, many events and concerts by famous artists, fills Bansko throughout the summer with tourists. For the safety of its guests, the community in Bansko will install security cameras throughout the city almost. Cameras in Bansko will be located at all entrances and exits of the town and in schools and some important junctions.

If you have not yet come into Bansko , then you miss out because Bansko is a combination of a modern ski resort, unique scenery, old town and great atmosphere. Bansko is the perfect place for year round recreation for every taste and pocket.