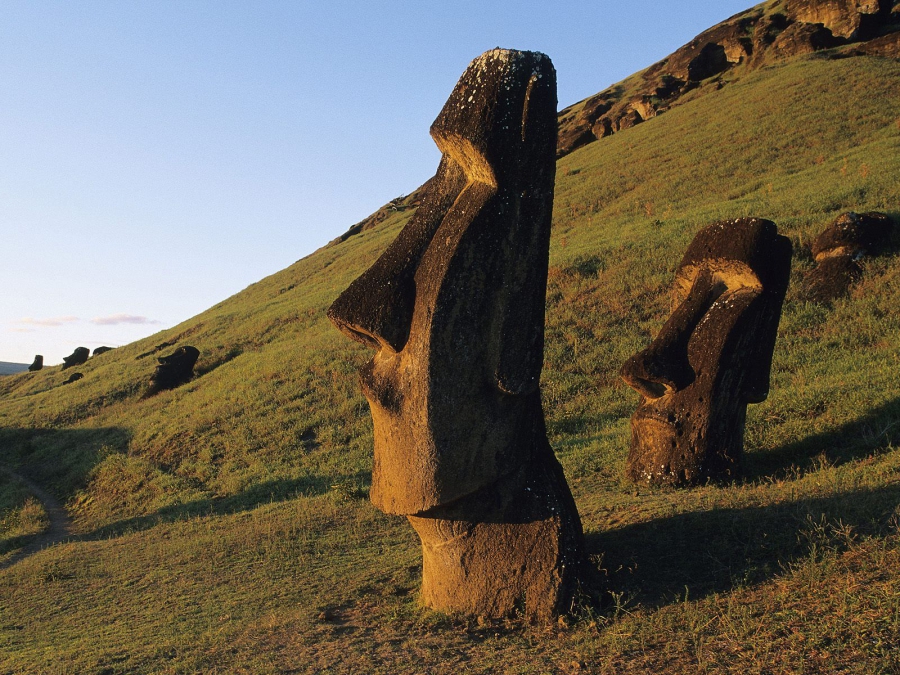 Guide
,
Chile
Can you imagine a place famous for what happened there many years before and what kind of evidence has been left before? Such is Easter Island. The triangular-shaped Easter Island is one of the most remote and isolated inhabited places on earth, located in the South Pacific between Chile and Tahiti. Consisting of a scant 64 miles of land with three extinct volcanoes, it is also one of the most strange and mysterious places. Easter Island is home to striking hand-carved immense statues, called moai, face-like giant stones, weighing many tons each. So far over 880 moai have been found, and archaeologists think that there may still be many more either buried or hidden. The moai statues are asymmetrical and only one has legs and is called Tukuturi. It is believed that they represent locals, ancestors of those who built them.

Discovered by Dutch explorer and sea captain Jacob Roggeveen on Easter Sunday (hence its name) in 1722, the Also called Rapa Nui (meaning Great Rapa) by modern islanders, the island also houses extensive rock art carvings and paintings with unique motifs, being a true model of human spirit. Half of the island`s 5,000 inhabitants are Polynesian but today they are citizens of Chile.

`Must see` attractions include Ahu Tahai, a ceremonial platform in Tahai that is made of rounded beach stones; Rano Kau, 400 meters volcano boasting panoramic views; Ahu Tongariki, an immense platform from where 15 statues stand facing the island; Orongo Village, a not-to-be-missed lake-filled crater where you can find remnants of the Birdman cult, Rano Raraku quarry, the most beautiful crater filled with water and plantation, and the walled structures at Ahu Vinapu, as well as the World Heritage site Rapa Nui National Park, where you will find the most important archeological resources of the island. Do not expect lush green forests, as there are only a few trees on the island. Easter Island boasts magnificent beaches but the best swimming is at the palm-fringed white sandy Anakena Beach or Ovahe on the north coast.

Fishing is a popular activity on the island and the natives are exceedingly expert in the numerous methods of capturing them. The most highly esteemed species include bonito, dolphin, ray and porpoise, as well as swordfish, shark, rock fish and flying-fish. Shell fish are also plentiful. Trekking in the several trails of Easter Island is really a great adventure, allowing you to fully experience the natural and archaeological beauty of this special place. The most recommended walks are the very demanding Patrimonial Route, the three-hour climb of Mount Terevaka, and the walk around the Poike peninsula.

Scuba diving and snorkeling are also popular activities in Easter Island. With its crystal clear and pollution-free waters, visual paradise offered by the flora and fauna and visibility up to 50 meters in deep sea, Easter Island is a true diver`s and snorkeler`s paradise. The scuba diving off Easter Island features unique caves, walls, corals and fish, though it is not for beginners as the water is cool.

With rich fascinating history, gorgeous beaches, spectacular highlights and the most awesome collection of prehistoric monuments in the Pacific, Easter Island is an evocating place to explore and discover!