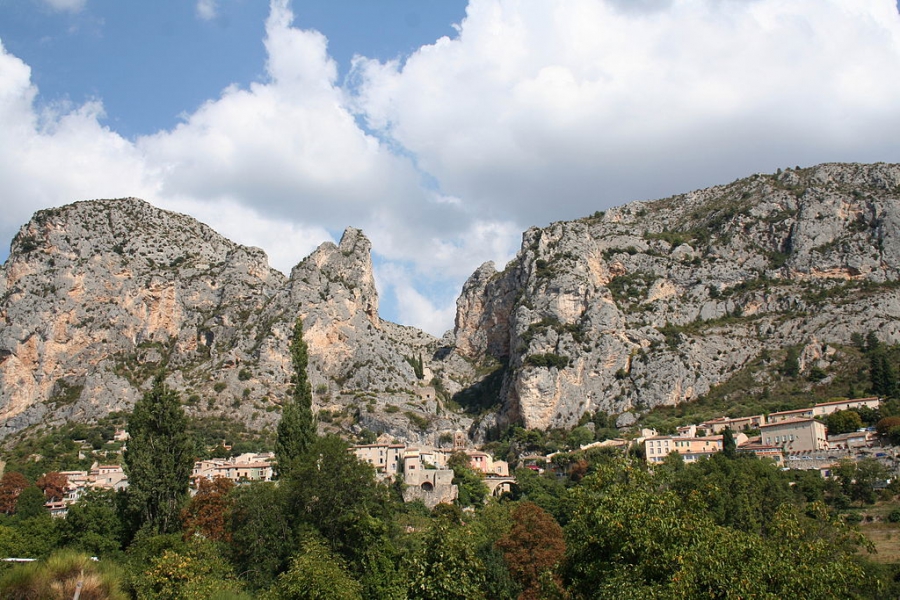 Guide
,
France
Moustiers Sainte Marie is a perched village near the western entrance of the Verdon Gorges on steep slopes below two limestone cliffs. For centuries its artisans have built up a reputation as producing one of the finest potteries, the faïences, shown in collections and museums all over the world.

Moustiers is a major tourist destination in France, not far behind St.Paul de Vence, Roussillon and Le Baux. These villages have been featured so many times in glossy travel magazines, that tourism trade has taken them over. As real estate became so valuable here, many of the locals owning houses in the village proper either cashed out or rent their properties. Expect plenty of souvenir shops, galleries, cafés, restaurants, and thousands of tourists a day, especially during the high season. The annual visitor count of Moustiers can`t be that far behind the 2.5 million for St.Paul de Vence.

But one has to admit that the infrastructure is first class here. Many fine restaurants, B&Bs and inns, immaculate village houses, alleys, fountains, churches - everything well kept. Try to avoid the full midsummer tourism and you will have a delightful time here, perhaps a bit too picture perfect to be real. You find a map of the village here.

The setting is dramatic with two limestone cliffs rising hundred or so meters behind the village. In between the two escarpments is the Rioul Valley with the 8th century Chapelle Notre Dame de Beauvoir (restored in the 12th and 16th centuries) watching over Moustiers. A spring, which flows out of the cliffs, creates a waterfall close to the village center. The setting is especially nice just before sundown, when the cliffs are bathed in a diffuse light for a couple of minutes. A metal star hangs above the village on a long chain between two cliffs. Legend has it, that a nobleman and crusader named Blacas (the later Ducs de Blacas), who was held prisoner by the Saracens in Palestine, pledged to hang this star over the village upon his safe return.

The village is clustered around the 12th century Notre Dame church, with a beautiful Romanesque bell tower. Walk the narrow alleys and vaulted passages past the many pottery ateliers. Make your way up to Chapelle Notre Dame de Beauvoir on a wide path with the 12 stations of the cross. It has been walked by pilgrims for the past 1500 years. From the top you have sweeping views over Moustiers, the Maire valley and Lac de Sainte Croix.

The first potters in Moustiers were monks. The legend says that a monk from Faenza in Italy brought the secret technique of producing the white enamel with him. The term faïencier appeared in Moustier`s historical archives first in 1679. The refinement of ceramics from a utilitarian item to fine tableware gave rise to a new type of artisans. The nobility`s fascination with the blue and white glazes and beautiful designs created strong demand for faïence. The town of Moustiers became the center for design and production of faïences. The best known faïencer from this time was Pierre Clérissy who worked in Moustiers. His brother Joseph headed the St. Jean du Désert factory in Marseille. The creative and ornate style of the faïence from Moustiers was the most coveted ceramics for more than 200 years. Other designers developed their own style variations, such as Joseph Olérys`s factory in the early 18th century. He produced the first polychromatic (multi-colored) faïences, baked over an open fire and using the dipping and enamel processes still en vogue today. During this time the famous Moustiers figures, the "Grotesques" were created, some of Moustier`s best known decorative items. In the mid 18th century the brothers Jean Baptiste and Louis Ferrat made vivid, bright colors popular by refining the manufacturing process for faïences further.

The popularity of the "Moustiers", as the faïence from Moustiers was called, declined in the 19th century as inexpensive china made in England swamped the French market and by 1873 the last faïencier closed shop. Marcel Provence (1892-1951), the Provençal historian and leader of the Félibrige, the Provençal movement founded by Frederic Mistral, was instrumental in reviving the faïence industry in Moustiers in the 1920s. Today there are 20 ateliers in Moustiers designing faithful replications and new creations, most of which are produced in workshops outside Moustiers.