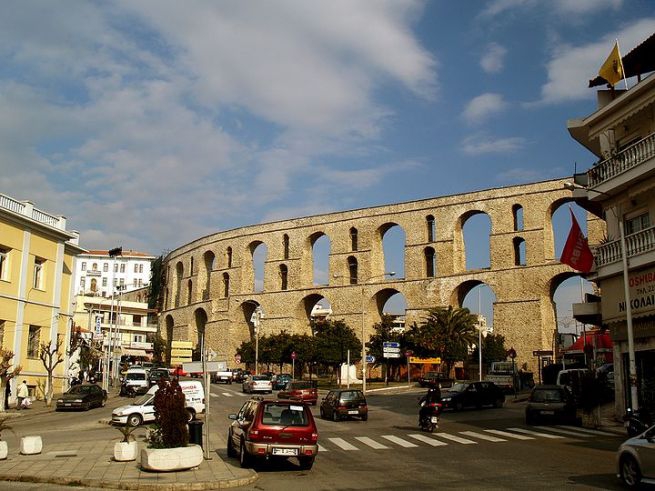 Guide
,
Greece
,
Eastern Macedonia and Thrace
Kavala, the capital and main port of the Kavala prefecture is amphitheatrically built on the slopes of Mt. Symvolo forming one of the most picturesque cities in Greece. The city’s breeze sweeps through its historic buildings, which perfectly reflect the city’s modern character.

Neapoli, Chrysoupoli, Kavala: according to archaeological finds, the city’s history dates back to the Prehistoric times. Initially the city’s core was restricted to the district of Panayia, which has been uninterruptedly inhabited since the 7th century BC. After 2500 years though, at the beginning of the 16th century, Kavala expanded maintaining these new borders until 1870; it was only after 1928 that it began to shape its today structure. Its strategic and economic importance over the centuries is attributed to its strategic position in Via Egnatia, which traversed the city connecting East and West, to its port and to the natural fortification of the peninsula, on which the old city was built.

The most important sights in Panayia district are the Castle, the Acropolis, the Imaret and the old Lighthouse at the end of Theodorou Pavlidou str, beneath which the rocks of Panayia are situated. The landmark of the Old City is the Mohamed Ali square, dominated by its statue, situated between the “konaki” (his house built at the end of the 18th century) and the church of Panayia, built in 1965 on the ruins of an older post-Byzantine three-aisled basilica. A tour around the Mohamed Ali Street will lead you to the oldest district of the city, where you will have the chance to visit Hussein Bey Mosque (or Music Mosque).

Kavala boasts a unique character reflecting its recent past: neoclassical mansions and big tobacco warehouses evoke the memory of a distant past when a wealthy bourgeoisie was dominating the city. In the “Mecca of tobacco” as Kavala was named in the past, thousands of tobacco workers, male and female, earned their living. Their faces will remain alive for all eternity thanks to the black and white photos adorning the walls of the city’s Tobacco Museum. At the cobblestoned, lined with palm trees port, stand one next to another modern buildings and fish tavernas, while fish boats cast their reflection on azure waters.

The city’s most popular meeting point is Eleftherias Square while the most buzzing point is Megalou Alexandrou Pedestrian Street featuring chic shops, cafes, bars as well as a tobacco warehouse that has been transformed into a shopping center. Close to Eleftherias square lies the old scenic neighborhood of Agios Nikolaos, where also the homonymous church – a former mosque- is situated. On the relics of an ancient pillar one can see what, according to tradition, is supposed to be Apostle Paul’s footprint, left there from the time that he first visited Macedonia.

Kamares, meaning arches, are the trademark of Kavala and a listed monument. It is actually an aqueduct built in 1550 by the Sultan Suleiman II, the Magnificent and repaired in the 19th century by Mehmet Ali to serve the water supply needs of the City. It is a monumental construction, 52meters high, consisting of 60 arches. On Kamares are perched some beautifully repaired refugees’ houses as well as 20th century stores.

The Castle and the Acropolis

The Acropolis was built by the Ottomans between 1425 and 1530 on the ruins of a byzantine castle. It consisted of the inner and the outer walls, which connected the acropolis to the peninsula’s walls fortifying the lower part of the hill on the side of the port.

The castle was built at a time when the war was conducted with early weapons such as bows, arrows and swords. This is why it could not defend the region sufficiently and ceased to operate as a defensive fortress in the following years. Around 1700AD it became a place of imprisonment and exile. The walls surrounding the peninsula of Panayia were reconstructed from the Ottomans at the beginning of the 16th century in order to protect the 130 hectares’ city.

Imaret is an impressive building erected by Mehmet Ali (1769-1849) as a donation to its native town. Ali was born in Kavala and later became Ruler of Egypt. It is situated on the western side of the Old City, in Panayia, occupying an area of 3500 m2. It was beautifully renovated by the Misirians, a family of tobacco traders. The building complex was a “kulliye”- a religious school- maybe the last of the Ottoman Empire offering social and educational services. On its premises it hosted two Madrasahs (religious educational foundations), two mestzit (pray-spaces), an imaret (a kitchen for soup), a mekteb (elementary school), offices and dormitories.

The initial educational and charity purpose of the foundation eventually changed and after 1858 it was even considered to be harmful for the city. It continued however to operate as a religious school until 1902 and as a charity foundation until 1923. After the exchange of populations between Greece and Turkey at the beginning of the ‘70s, Imaret was inhabited by refugees. After 1967 Imaret entered into an era of decadence. Its renovation lasted 22 months and today it operates as a luxury hotel.

The Mecca of tobacco

The tobacco cultivation started in Kavala at the beginning of the 19th century forming an indispensible part of the city’s history for over 150 years, as well as the reason for the city to be wealthy and prosperous. From 1918 onwards operated in Kavala around 50 tobacco companies while the 160 tobacco warehouses engaged half of the country’s tobacco workers (around 14.000).

However, the world economic crisis that broke out in 1929, the fact that the profession became less “protected” and the withdrawal of many men from tobacco industry led the biggest tobacco centre of the Balkans to a great decline.

Don’t miss the opportunity to visit a particularly interesting museum narrating the history of tobacco industry in Kavala. The exhibits include tools related to the tobacco procession, photographs and rare documents.