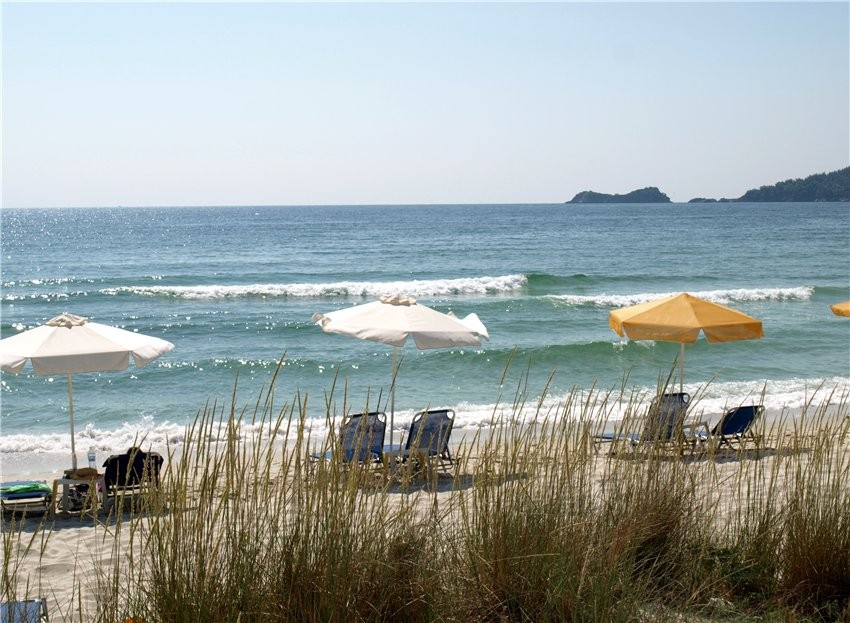 Guide
,
Greece
,
Eastern Macedonia and Thrace
An island with crystal beaches and lush greenery, Thassos in Greece is the northernmost island of the Aegean Sea, very close to the coasts of the mainland. Ideal for family and relaxing holidays, Thassos island has gorgeous beaches, either organized or totally secluded. The mountainous villages in the inland have traditional architecture, with stone houses, paved streets and grey-tiled roofs. The surrounding landscape is great for trekking with paths leading to abandoned places, castle ruins and caves. The most interesting sightseeing to visit in your Thassos holidays is the Ancient Agora, while the Monastery of Archangel Michael offers breathtaking view to the Aegean Sea

Located on the northern side of the Aegean Sea, Thassos is a lush green island with amazing beaches. This is a totally relaxing place, ideal for long days on the beach. With crystal water and surrounded by lush greenery, the beaches on the island can be organized with lounges and watersports or totally secluded for more private moments. This is also an island for hiking, as many hiking trails cross the countryside and pass through mountainous villages and gorges. Holidays in Thassos are a great experience for families and romantic couples.

Thassos really is the jewel of the Aegean sea for many people. More people, by percentage, return to Thassos after their first visit than any other Greek island. For those who are not aquainted with this special place on earth, Thassos is the most Northern Greek island situated approximately 8 miles from mainland Keromotti Port, and it`s nearest city is mainland Kavala. Thassos is also one of the greenest islands with a near perfect climate of hot summer sun and cool winters with a little wind and rain mixed in. It has been known to snow in late April and then be 85 degrees c in early May!

The timetable of ferry boats to and from Kerromotti to Thassos is frequent during the summer holiday season months. These Aneth and NEK ferry boats still operate regularly at other times of the year. The timetables do change regularly so it is advisable to check.

Holiday visitors arriving by aeroplane land at the Alexander the Great Airport near Kavala, and have an enjoyable ten minute ride to Kerromotti Port.

The nearest mainland city is Kavala and is accessed from Limenas, the capital of Thassos Island, by: Flying Dolphin which takes only foot passengers. This choice is much quicker than the ferry boats but slightly more expensive. The last Dolphin back to Limenas is at 14:00 from the Kavala Port.

According to Myth, Thassos owes its name to Thasus, son of Agenor who was the king of Tyre or Sidon in Asia. When Zeus took the shape of a bull and stole Europa, Agenor who was her father ordered his four suns to search for her. He also ordered them not to come back to their birthplace without her. Thus, Phoenix headed southwards, Cilix northwards, Cadmus wandered around Greece and Thasus, who according to other versions was the son of Cilix, after having travelled to remote places reached verdant Thasos where he stayed thus giving his name to the island.

Another version is that Thasus was the son of Poseidon, while according to others the name Thasos is a corrupted form of word ‘thasos’ (forest) of the righteous, also called Golden Island in the past because of the gold mined there. Dionysus called it Ogygia Thasos, coast of the goddess Demeter for its fertility and fortune, while according to Pliny it was also called occasionally Aeria and Airthria (athereal and serene).

The Green Circle of Thassos

Thassos, GreeceWith the beauty and variety of its scenery, its plethora of fine beaches, interesting antiquities, picturesque mountain villages and excellent accommodation, Thassos is a materialization of most people’s pre-conceived ideas of what a Greek island is all about. Thassos has the added advantages of an efficient tourist infrastructure, friendly and helpful islanders and a road system with regular bus services that ring the island. In total, it is one of the most appealing of the Aegean islands. Now firmly established on the package holiday map, Thassos has not been vulgarized by commercialism and here visitors are respected and not taken advantage of.

Essentially circular in shape, Thassos is mountainous and of volcanic origin. Mount Ipsario (Ypsario) at 1,203 metres in height forms its geographical centre, and its slopes are deeply gashed by torrent courses that radiate to the islands coasts. These valleys are thickly wooded with Pines, Firs, Chestnuts and Plane trees.

Thassos Town (Limenas), situated on the islands northern coast, is a curious jumble of modern buildings and archaeological ruins. The remains of temples, theatres, gates, basilicas and walls happily co-exist alongside modern housing, tavernas, cafes and administrative buildings. The centre of the ancient town occupied a coastal tract beyond which steep slopes led up to the acropolis from whose ruins give a good general view of the towns form and situation, both ancient and modern. A tour of the ancient ramparts is highly recommended, although a stout pair of walking shoes are required!

Retaining its prosperity throughout Roman and Byzantine times, Thassos was acquired by Genoese Francesco Gattelusio prior to its conquest by the Turks in 1455. Some three centuries later it was given by Sultan Mahmud II to the family of the Egyptian ruler Mehmet Ali, but in 1770-74 the island was occupied by a Russian fleet. By this time the population of Thassos had gravitated to the inland villages as a protective measure. In 1912, Thassos was reunited with Greece.

Thassos, GreeceVisitors should make a point of exploring the entire island by following the attractive coastal road, making forays into the interior wherever branch roads make this possible. Travelling south-eastwards from Limenas, a two kilometre drive leads to Makryammos (literally ‘long sand’) with a sandy beach, hotels and bungalow complexes.

Beyond Makryammos the circuit road takes one of its frequent detours away from the coast to serve the delightful stone roofed village of Panagia set on the eastern side of Mount Ipsario amid forests and springs. Back on the coast road, leads to Skala Panagia (Golden Beach).

The south-eastern section of the island has old marble quarries and at Archangelos nuns cheerfully indicate where St Luke is said to knelt to pray. The road now turns west, past good beaches to Potos, where a branch road leads inland via a beautiful valley to the old mountain capital of Theologos. Here are the ruins of a medieval castle and a house where Mehmet Ali is said to have spent part of his youth.

Beyond Potos is Limenaria, the islands second largest settlement after Limenas. Here the islands circular road begins its return journey to Limenas via the west coast passing the resorts and villages of Maries, Kalirachis, Sotiras, Kazaviti, Prinos, Rachoni, Agios Georgios and Pachis.

It must be said that in our experience, where ever you go you will be made very welcome and enjoy a good meal. We have not had a bad meal anywhere on Thassos Island.

A favourite trip to Kavala is on a Saturday for the large market. An Aneth or NEK ferry boat will also take you to Kavala from Limenas. They also visit Kavala from Prinos Port although travelling from here takes about one and a half hours. From Limenas it takes about an hour. Both ports are very easy to reach with tickets purchased on the day before the trip.

Transportation around the island can be sought by the normally regular bus service. They provide transport to inland villages and coastal resorts as well as drops and pick ups during a complete tour of the island. I say normally regular because it is also quite usual for the bus timetable to be ignored, so don’t take it too seriously! This is not a problem because one will be along soon!

Taxis of course are available, as is car hire. Many car hire companies are advertised but it is advisable to choose one of the well known companies like Avis for complete peace of mind in the event of an accident.

A trip around the island is about 95 km in length and a very pleasant experience. It can be done in less than 2 hours if stops are limited, but if you allow a day, a drive around the island can be achieved in a relaxing way enjoying many stops along the way for investigating with excellent photo opportunities.