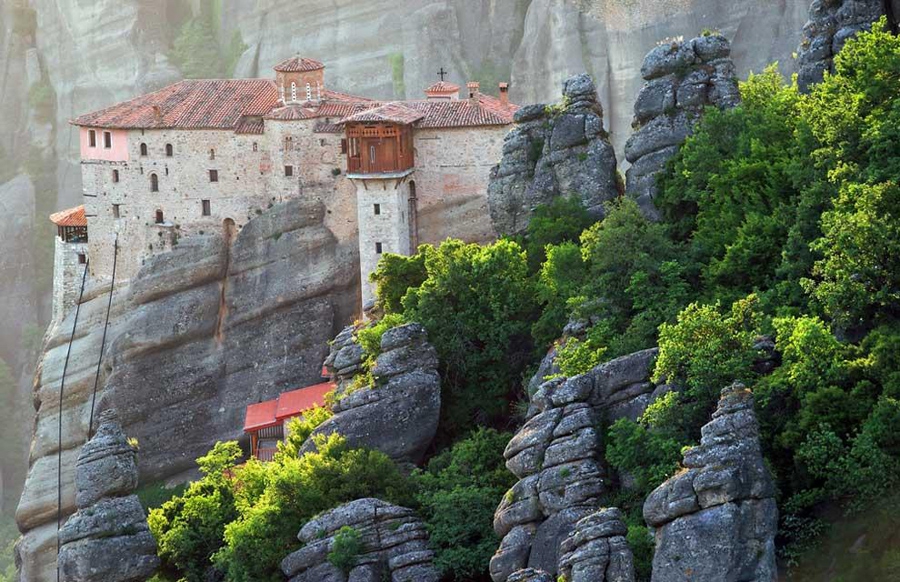 Thessaly, Modern Greek Thessalía, region of northern Greece south of Macedonia (Modern Greek: Makedonía), lying between upland Epirus (Ípeiros) and the Aegean Sea and comprising chiefly the fertile Tríkala and Lárissa lowlands. It is well delineated by topographical boundaries: the Khásia and Cambunian mountains to the north, the Óthrys massif to the south, the main Pindus (Píndos) Mountains to the west, the Olympus (Ólympos) massif to the northeast, and the coastal ranges of Óssa (Kíssavos or Óssa) and Pelion (Pílios) to the southeast. Thessaly is drained by several tributaries of the Pineiós (also called Peneus) River, which empties into the Aegean Sea after passing through the Vale of Tempe. Several passes carry highway traffic to and from the region, and the main railway from Athens (Athína) to Thessaloníki enters Thessaly by the Coela Pass and exits through the Vale of Tempe.

Generally the most level district of Greece, Thessaly is split by a range of hills into a southwestern sector dominated by the town of Tríkala and an eastern sector centring on Lárissa (Lárisa). To the southeast the Magnesia Peninsula, a prolongation of the Pelion (Pílios) massif, encloses the Pagasitikós Gulf (Gulf of Vólos).

The home of an extensive Neolithic culture to about 2500 bce, Thessaly later remained on the fringe of the Bronze Age civilization of Greece, although Mycenaean settlements have been discovered, as at Iolcos near Vólos. Toward the end of the Mycenaean period the Thessali entered the fertile plain from Thesprotía in southern Epirus and imposed an aristocratic rule on the older inhabitants. The rich lowlands became the home of such baronial families as the Aleuads of Lárissa and the Scopads of Crannon, who organized a pan-Thessalian federation under an elected military chief and controlled the Amphictyonic League of northern Greek states in the 6th century bce. The plains proved well suited to horse breeding, and the Thessalians were strong in cavalry.

In the Classical period the natural isolation and character of the people kept Thessaly aloof from the main currents of Greek life. Politically unstable because of tribal rivalries, they never long sustained a concerted action. The Aleuads joined the Persians during the Greco-Persian Wars. After the 4th century they were usually Macedonian vassals until, in 148, Rome incorporated Thessaly into the province of Macedonia.

About 300 ce the emperor Diocletian made Thessaly a province, with its capital at Lárissa; in the Byzantine Empire it was attached to the theme (military district) of Thessalonica. From the 7th century to the 13th it was invaded or controlled by Slavs, Saracens, Bulgars, and Normans. The influx of nomad Vlachs (Walachians) from the Danube was so intensive by the 12th and 13th centuries that Thessaly came to be called Great Walachia (Megale Vlachia); colonies of Vlach herdsmen are still found there. In the 14th century it was overrun by Catalans and Serbs, the latter setting up the capital at Tríkala. When in 1394 the Turks assumed rule, they retained Tríkala as seat of the pasha of Thessaly. In 1881 most of Thessaly was ceded to Greece by Turkey, and after the Balkan Wars (1912–13) the remainder north of the Vale of Tempe passed into the Greek kingdom.