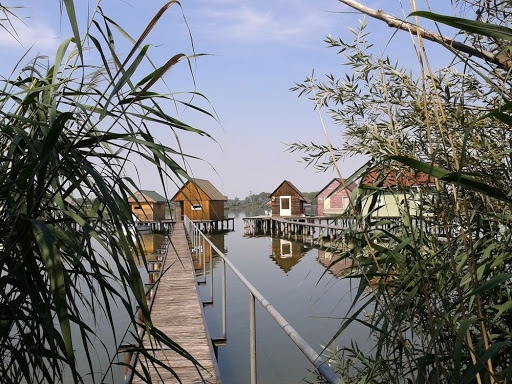 Guide
,
Hungary
This Hungarian stilt village is built in a lake that never freezes over due to the power plant that that uses it as a cooling pond.

The neighboring towns of Bokod and Oroszlány, about 50 miles west of Budapest, have more than two linear miles of cabins and cottages suspended on stilts over Lake Bokodi. The little houses are mostly used by locals in the summer months, but they also cater to year-round anglers who take advantage of one weird fact about the lake — despite the frigid Hungarian winters, it rarely freezes over.

ake Bokodi, in the village of Bokod, about 80 kilometers west of Budapest, Hungary, is an artificial lake created in 1961 by the Oroszlány Thermal Power Company by flooding a low-lying meadow next to the plant. The power plant draws cold water from the lake to operate its boilers, and warm water is returned back to the lake. This continues recycling of the water causes the lake to never freeze even in the chilly winter air.

Over the years, the lake became a popular spot for fishing and angling, and a number of small wooden cottage on silts were erected by the locals, with wooden boardwalks leading to them. Other than the locals, few were aware of this picturesque spot, until a photograph of the lake and its floating houses appeared in the background of Bing Search in November 2013. As Lake Bokodi’s fame spread through the internet, tourists and photographers started thronging this remote village.

Part of Lake Bokodi’s attraction, aside from its beautiful setting, is its never-freezing water that offers continued fishing opportunities for anglers, all round the year. However, in 2015, the power plant shut down which means that the lake is no longer heated in the winter. This is expected to negatively affect Lake Bokodi’s tourism opportunities.