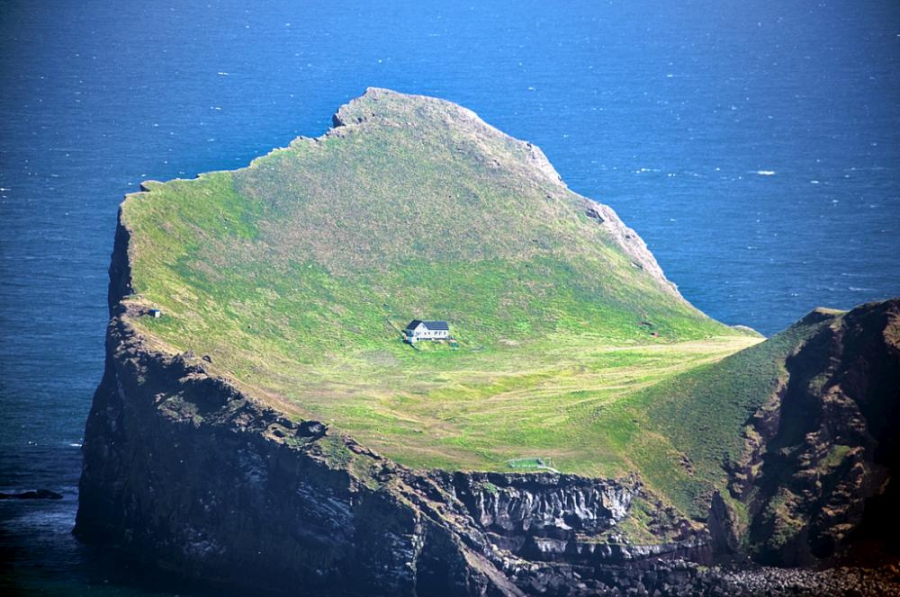 Guide
,
Iceland
,
Vestmannaeyjar
This enchanting house is located on an island called Elliðaey near Vestmannaeyjar, a small archipelago off the south coast of Iceland. The house was given to singer, Bjork from her motherland as a “Thank You” for putting Iceland on the international map.

Elliðaey is the third largest island (0.46 km2 (0.18 sq mi)) of the Westman Islands, located south of Iceland. The island is uninhabited, but has a large hunting lodge, constructed in 1953.

Eldfell is a cinder cone volcano just over 200 metres (650 ft) high on the Icelandic island of Heimaey. It formed in a volcanic eruption which began without warning just outside the town of Heimaey on 23 January 1973. Its name means "Mountain of Fire" in Icelandic.

The eruption caused a major crisis for the island and nearly led to its permanent evacuation. Volcanic ash fell over most of the island, destroying many houses, and a lava flow threatened to close off the harbour, the island`s main income source via its fishing fleet. An operation was mounted to cool the advancing lava flow by pumping sea water onto it, which was successful in preventing the loss of the harbour.

Following the end of the eruption, the islanders got heat from the slowly cooling lava flows to provide hot water and to generate electricity. They also used some of the extensive tephra, fall-out of airborne volcanic material, to extend the runway at the island`s small airport, and as landfill on which 200 new houses were built.