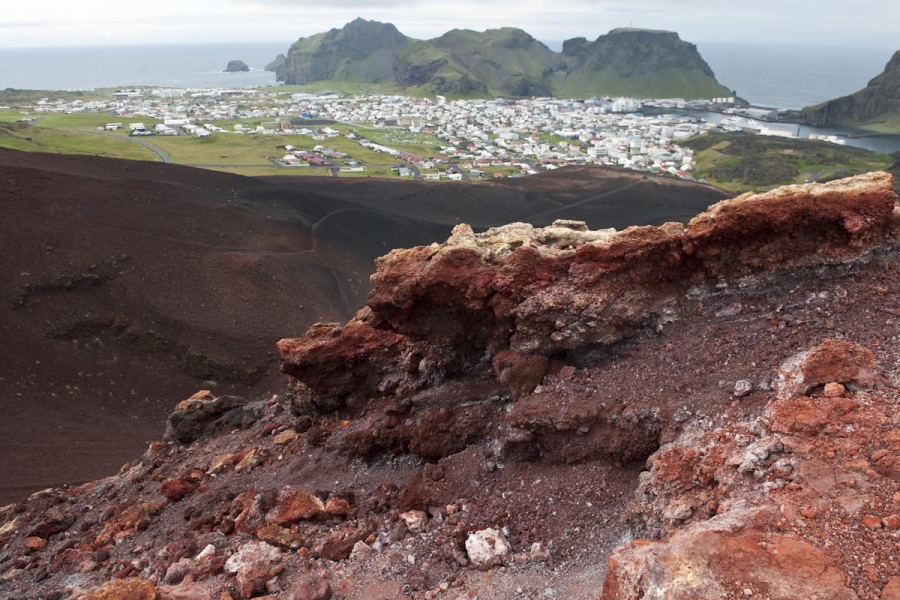 Guide
,
Iceland
,
Vestmannaeyjar
Heimaey is the largest island (13.4 km² - 5.2 sq. miles) in the Vestmannaeyjar cluster, approximately 4 nautical miles (7.4 km) off the south coast of Iceland. It is the only island in Vestmannaeyjar that is populated, and there are around 4,500 inhabitants.

Part of the city of Heimaey was buried under thirty meters of lava when a volcano erupted in 1973. The residents have placed street signs on top of the solidified lava to indicate where the streets used to run.

On 23 January 1973 at around one in the morning a volcanic eruption of the mountain Eldfell began on Heimaey. The ground on Heimaey started to quake and clefts[clarification needed] began to form. The clefts grew up to 1600 meters in length, and soon lava began to erupt. Fissures erupted spraying lava in to the air. The ash was also blown out to sea. However later, the situation deteriorated; the fissures closed up and the eruption became one concentrated lava flow, which headed towards the harbour. Also the winds changed, and half a million cubic metres of ash were blown on to the town. During the night the 5000 inhabitants of the island were evacuated, mostly by fishing boats, as almost the entire fishing fleet was in dock.

The encroaching lava flow threatened to destroy the harbour that was the main source of livelihood for most of the town. The eruption lasted until 3 July the same year. However, townspeople constantly sprayed the lava with cold seawater, causing some of it to solidify and much to be diverted, thus saving the harbour from destruction. During the eruption, half of the town was crushed and the island grew a great deal. Heimaey was about 11.2 km² before the eruption, but the "island" grew by about 2.24 km2. The island measured about 13.44 km² when the eruption finally stopped. Only one man died in the eruption. This event is described by John McPhee in his book "The Control of Nature".

The Landnáma tells that after Ingólfur Arnarson, the first settler in Iceland, had spent a winter at Ingólfshöfði, he released his "Öndvegissúlur" into the water and followed them west. (These were pillars associated with the chief`s chair. They were put into the sea and let float to shore. Where they came ashore, the Viking who followed it would build his farm.) At Hjörleifshöfði, Ingólfur found that his brother/close friend Hjörleifr Hróðmarsson was dead and his slaves were missing. Out at sea he could see boats going towards a small group of islands, and he set off after them.

Abducted from the north of Ireland, the slaves were called westmen (Vestmenn), as Ireland was the most western part of the known world then. The slaves went ashore at Heimaey and took shelter in the mountains. Ingólfur hunted them and slaughtered them in revenge for their killing his foster brother. In the process he created names for various places —for example "Dufþekja", an area on Heimaklettur, Heimaey`s highest mountain (283 m), is named after the slave Dufþakur. He was said to have thrown himself off Heimaklettur at that point—preferring to take his own life than to let Ingólfur take it.

It is estimated that approximately 250 million cubic metres of lava and ash were produced by the eruption,about 10% of which were ash and pumice. The volcano had reached a height of around 225 metres by the end of the eruption.
Heimaey had previously been some 12 square kilometres, but had extended to 14,5 square kilometres after the eruption. About 5,5 million tons of seawater containing some 180 thousand tons of salt were pumped onto the lava flow in an attempt to cool it.