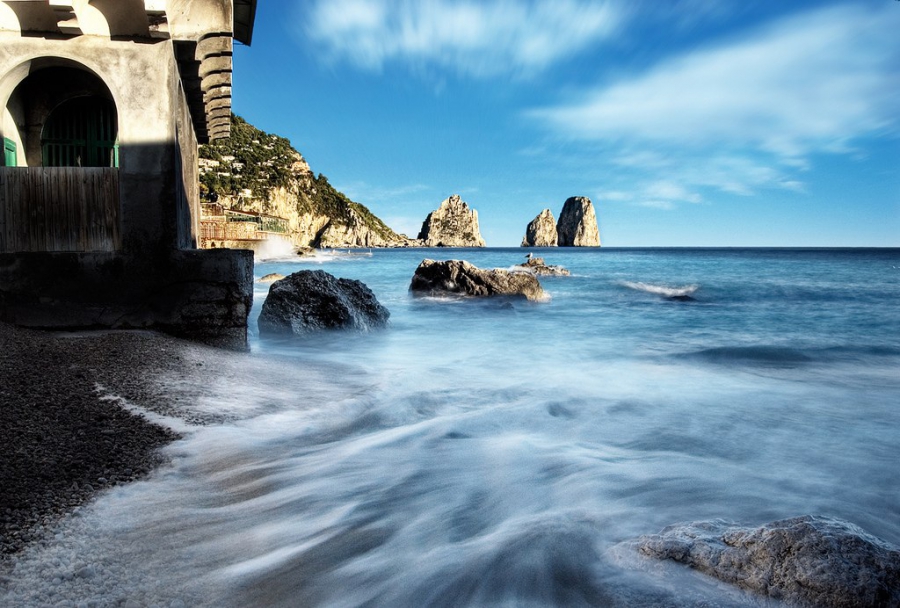 Guide
,
Italy
The Island of Capri is one of the most picturesque and visited locations in Campania. Its unique beauties were celebrated in ancient times and later published for the world in Homer`s works: Odysseus (known in Latin as Ulysses) sailing past the island, narrowly escaped the fate of those who hear the voices of the Sirens.

Thus the island has a mythical charm, as well as its natural treasures, through the writings and legends of Ancient Greece. Its breathtaking landscapes and beauty stretch from the rocky caves around the island to the edge of the horizon, and has been an inspiration to poets, lovers and travelers throughout the centuries. Geologically speaking, the island is Karst, underlaid with limestone which has been eroded by dissolution over the years forming fantastical ridges towers and sinkholes in the rock. This process over time separated Capri from the mainland.

The island of Capri is composed of two municipalities: Capri and Anacapri, each with their own administration and touch of regional rivalry. The latter is built on a high plateau, affording staggering views of sheer cliffs from dizzying vantage points.

The sea emerging below is very deep, and harsh jagged caves have formed there. The most famous of these is the Grotta Azzurra or the "Blue Grotto", now known to have been a Roman bathing place. This lagoon is haunted by a dazzling shifting turquoise blue. Small openings in the back of the cave admit daylight which, reflecting on the limestone floor and walls, creates a fantastical and magical atmosphere. It has attracted visitors and inspired awe from all who have seen its ancient limestone walls and learned of the history of this oceanic cave.

In contrast to the intimate space and vivid color of the cavern, are the three peaks further out to sea, emerging from the azure blue water, pointing toward the sky. These peaks are known collectively as the Faraglioni. Their names are: Stella, di Mezzo and Scopolo or Fuori (meaning outside, probably because it is the furthest away). These three splendid fragments of Capri are known technically as stacks and are formed when erosion causes a solid land mass to divide and it becomes separated by water, or when a cave or natural rocky arch collapses. A fragment of the land is then isolated from its original body in the shape of a vertical column or steep rock rising out of the sea. The Faraglioni are famed for their breathtaking beauty and home of a variety of rare wildlife.

When the tide is low, Roman remains are visible through the water on the floor of the cave, suggesting that in bygone times the ground in and around the blue grotto which had itself been the site of a Roman villa, was higher. The artifacts on the floor of the cave are thought to be connected with the Emperor Tiberius who may have used the cave as a bathing place, and probably decorated the floor with statues. It also seems that other entrances to the grotto were created in an attempt to improve irrigation and later abandoned, supplying spaces in the rock by which sunlight could enter with dramatic effect. So unless visitors simply wish to swim in the grotto, it is wise to coincide visiting times with the falling tide.

Tiberius loved the island, and having obtained it from the possession of Naples in exchange for Ischia, he had a series of villas built there, and spent the last ten years of his tyrannical reign secluded from the manic realities of Roman life amid the tranquillity and beauty of this unique island. He also founded the world`s first Archeological Museum to display the fossils and artifacts discovered during excavation carried out by his workers for the building of the villas.

For the Greeks and later the Romans till Tiberius, Capri was an island of boar goats, and other animals. Hence the Island was named Kapros, which in Greek means "wild boar".

Capri was colonized by the Greeks, and was later adopted as a possession of Naples, till the Emperor Augustus upon visiting the Island saw a dry twig of the island in flower. The element of the miraculous in this made a profound impression on him, as from that time on he did everything in his power to obtain the Island. Having achieved his aim, bartering Ischia for Capri with the Neapolitans, he commenced with a multi villa building project probably as many as twelve, rendering the island habitable.