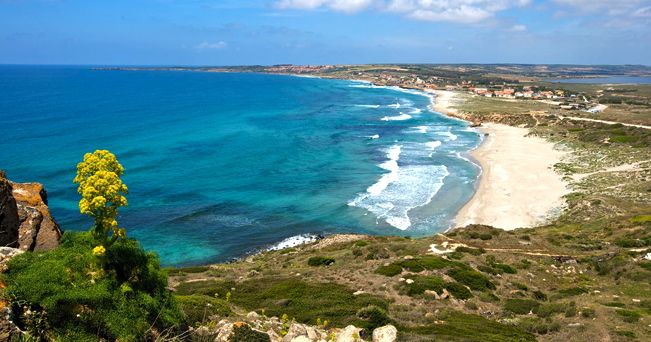 Guide
,
Italy
,
Sardegna
The Province of Oristano is located in Sardinia`s west. It borders Sassari Province to the north, Nuoro Province to the east, and the Provinces of Medio Campidano and Cagliari to the south. Its total surface are is 1,174 square miles and includes 88 municipalities.

The provincial terrain is varied: from the vast Campidano Plain (making up part of the Provinces of Medio Campidano, Carbonia-Iglesias and Cagliari) to the Monte Ferru Range, whose highest peak (Monte Urtigu) reaches 3,281 feet above sea level.

The Sinis Peninsula is also part of the province, boasting over 56 miles of coast, ranging from sandy beaches to calcareous cliffs and rocky bluffs. Two rivers cross the province: the Tirso, which opens to the Gulf of Oristano, and the Temo, the island`s only waterway (and only partially-navigable).

Oristano Province comprises many protected areas, like the Monte Arci Regional Park, the Sinis Peninsula – Mal di Ventre Island Marine Protected Area, and the S’Archittu a Santa Caterina Natural Monument near Cuglieri. S`Archittu is a 49-ft-high natural arch carved by the erosion of the calcareous walls of what once was a grotto.

More than 6000 hectares` worth of wetlands cover the terrain around Oristano. The most famous is the Stagno di Cabras, considered one of the best-preserved wetlands of Europe. The area is home to several rare aquatic bird species, such as the red-crested pochard, purple heron, purple swamphen and Eurasian coot, in addition to fish varieties of seabass, eel and mullet (the eggs of which are used to make bottarga).

Highly-remarkable is the Stagno di Mistras, breeding ground for gulls and flamingos; the Stagno di Sale Porcus, now a protected area; and Is Benas, with its exquisite caniottu (a small seabream).

Finally, Lake Omodeo, an artificial basin named after the Milanese engineer that designed it in 1918-1924, serves for irrigation, electricity production and mitigation of flooding along the Tirso River.