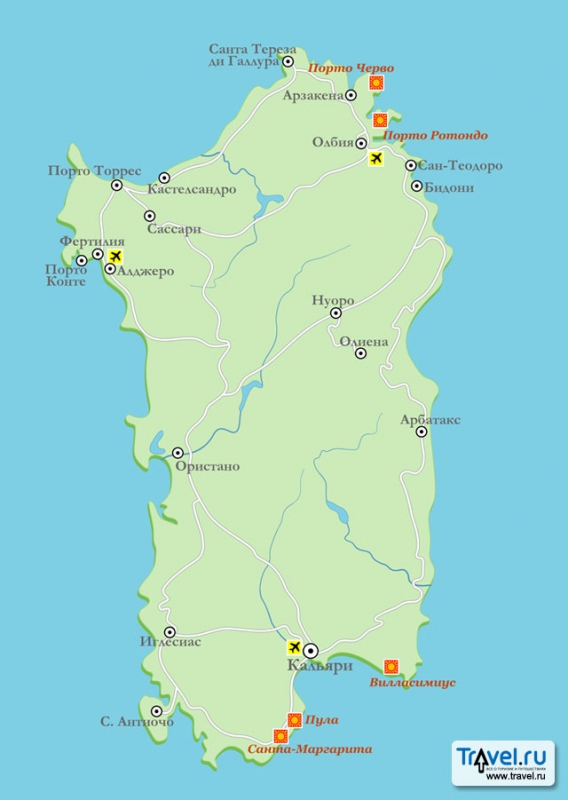 Guide
,
Italy
A voyage over an emerald sea, past characteristic coves and beaches of snowwhite sand … this is Sardinia, an island that strikes its visitors with natural contrasts, the lights and colors of a region that boasts old traditions and a wild and pure nature.

Situated in the middle of the Mediterranean Sea, Sardinia is a mainly mountainous region, without high peaks, with a vast and charming, yet bittersweet, natural environment. In fact, the presence of man does not seem to affect this territory; great surfaces still preserve their natural composition, luxuriant woods with even millenary trees, small desert areas and marshes inhabited by deer, wild horses and rapacious birds.

The sea reigns over this region with its colors that migrate into the coves, along the coasts, towards the beaches and the most popular resorts. An example is the Costa Smeralda (Emerald Coast) with Porto Cervo set as its gemstone and uniting the history and culture of ancient traditions with a joyful and colourful nightlife. Porto Cervo was named after its enchanting cove that resembles the antlers of a deer; the Old Port is considered the best-equipped touristic port in the Mediterranean Sea. Porto Rotondo is also a famous location; it overlooks the wide Gulf of Cugnana and is full of villas and piazzas swathed by such a splendid natural environment as this.

Those who prefer the mountains can explore the area of Gennargentu, the vastest mountain range in Sardinia; with its peculiar landscape, it proves that the loveliest painter of them all is Mother Nature herself. This region is rich in flora and fauna, with its mouflons, golden eagles, Sardinian deer and several other species now threatened with extinction.

Among its wonders, Sardinia offers the visitor the Nuragic complexes scattered all over the territory. These monuments are unique to the world, testifying to an ancient culture that - though it endured from the 16th to 15th Centuries B.C. still rains rather mysterious. The Nuragic constructions were built using great blocks of stone and developed around a central cone-shaped tower that communicates strength and power. These are archaeological sites where it is possible to grasp the archaic charm of ancient rituals and domestic life. Of these many constructions, the Barumini complex, in the Province of Cagliari, is among the sites in the UNESCO World Heritage List.

The island has a long and intriguing history, and is dotted with interesting archaeological sites. In the Bronze Age the island was populated by an enigmatic people who built nuraghi - stone towers - across the island, along with palaces, sacred wells and other structures. Many remain, as ruins, and the importance of these sites is recognised with a UNESCO World Heritage listing. As Sardinia is on Mediterranean trading routes, various subsequent civilisations colonised or conquered the coastal areas, including the Phoenicians, Romans and Byzantines. Later the island was for some time under Spanish domination. A version of Catalan is still spoken in Alghero. The mountains inland, difficult to conquer and offering little to invaders, have a reputation as untouched pockets of ancient culture and tradition.

Sardinia has a dual reputation within Italy. It is one of the most popular summer holiday destinations for beach-loving Italian families - indeed, it`s said that whole districts of Romans decamp with their neighbours to the same Sardinian beaches each August. At the same time , Sardinia`s ancient `otherness` casts a lingering and occasionally sinister shadow: the shepherds and hardy inland communities, the mountains once seen as the lair of kidnappers and the enduring individual character and dialects of Sardinia all make the place rather un-Italian. None of this, however, affects the tourists who flock to the white beaches and blue seas.

More ...
The smartest destination in Sardinia is the Costa Smeralda, the `emerald coast`. This beautiful stretch of coastline at Sardinia`s north-east corner was developed in the 1960s by wealthy investors including the Aga Khan. Every summer gossip magazines are full of photos of Italian and international `celebrities` partying, swimming or hanging out on huge yachts in Porto Cervo and the other exclusive resorts of the Costa Smeralda.

Sardinia isn`t all glitz, though. The island has many beaches and stretches of coast which are largely unspoiled and plenty of down-to-earth towns and resorts. Lagoon, island and mountain habitats all feature among the region`s nature reserves, where you can see a wide range of wildlife including flamingoes, golden eagles, mountain goats and wild white donkeys.

Sardinia has three international airports: Alghero, Olbia and Cagliari. All three are served by flights from the UK, although services are reduced considerably in the winter. British Airways and Easyjet both fly to Sardinia`s capital Cagliari. Ryanair fly to Alghero and Easyjet to Olbia. These three airports make Sardinia, in the summer months at least, very accessible. The airports are all very close to the towns they serve, and connected by public bus services.

Ferries connect the island to mainland Italy, and if you prefer not to fly, you could travel by train via Paris to Genoa or Livorno and then catch a ferry.

Sardinia is best explored by car, as the island`s prehistoric archaeological sites and glorious beaches are scattered and often remote. However, the island`s towns are connected by trains and buses, and with a bit of research it is possible to enjoy a rewarding holiday using public transport. In the summer steam trains operate on some of Sardinia`s scenic trenino verde (`little green train`) routes.

Sardinia is ideal for several different types of holiday, or, if you have time, a combination. For a lively city break, visit Cagliari, with its museums, bars, affordable restaurants and nearby sandy beaches. For more of a holiday resort feel, fly to Alghero to explore the historic town centre and enjoy boat trips. North of Olbia, the exclusive - and expensive - resorts of the Costa Smeralda line one of the island`s most beautiful stretches of coastline, and beyond the glitz you`ll come to the island archipelago of La Maddalena. This cluster of islands - once home to Garibaldi and now a marine reserve - and the island of Sant`Antioco, down in the south west, make good locations for a tranquil island getaway.