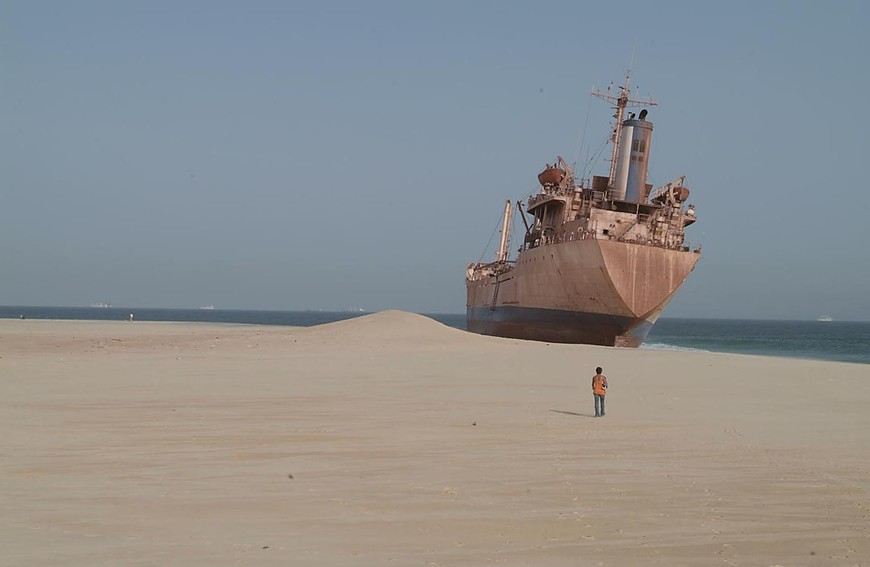 Guide
,
Mauritania
Nouadhibou its the first city after the border with Moroccan occupied Western Sahara. From here arrive by land hundreds of stolen vehicles, man slavering and all kind of goods, even vegetables can be passed illegally at the border. Nouadhibou is a place never constructed to fit the needs of tourists. There is very little to see inside the city of more around 60,000 people, but the nature here is of splendid beauty.

The city of Nouadhibou (Arabic: نواذيبو‎) is the second largest city in Mauritania and serves as the country`s commercial center.It is famous for being the location of one of the largest ship graveyard in the world. Hundreds of rusting ships can be seen all around, in the water, and on beaches.

One of the most commonly read explanation for that situation is that Mauritanian harbor officers were taking bribes and allowing ships to be discarded in the harbor and around the bay.

This phenomenon started in the 80`s after the nationalization of the Mauritanian fishing industry, numerous uneconomical ships were simply abandoned there. I`m guessing that foreign ship owners later found very convenient to get rid of their old vessels in the bay.

My feeling balances between anger and amazement by the sight of those rusted skeletons Amazement for the dreamy vision, anger for the ecological and social disaster.

What to say a bout this city...what to say about Mauritania in general... its indeed a different country from whatever you’ve been used to. Its full of poverty, racial conflicts, garbage and worldwide mafia.

There`s this huge worldwide terrorist organization that is very active in this city, more than in the capital which the presidential control is bigger. This organization which i don’t have the need to write the name is very powerful here in Nouadhibou and takes control of almost every single facility related to Islam. Huge and good quality mosques (Mauritanian speaking of course) are visible and you even notice the leaders mansions near by with grand cars BMW and big expensive SUVs 4 wheel drive cars at their door, in a country that the normal salary is not more than 15000 UM, about 40- 45 euros, which usually 6000 go to pay the monthly rent of a single room no electricity and proper toilet facilities.
Specially here in Nouadhibou, various organized mafia groups and underground organizations find refuge to make business. Korean, Russian, Chinese, Nigerian, Senegalese and also White Moors underground organizations are settled here with their business of drugs, prostitution, car export, fish export, guns and even man slavery working at day light.

Nouadhibou like many desert cities, is immodestly large, and comes in three parts. The first is the new quarter of Numerowat in the north, with mess of construction sites, fading into shantytown on the north side. This is where the majority of people live. The various quarters of "Numerowat" are identified by robinets (premiere robinet or deuxieme robinet etc) according to the nearest public water standpipe, which come at 500 metre intervals along the tarmac road to downtown Nouadhibou.

Downtown is "Ville", with all the usual services and shops and the city main market. On the south side of town, a full 10km from the city centre, is the iron ore company`s dormitory town of Cansado.

Nouadhibou is stretching along a thin peninsula running out from and parallel to the mainland in southern direction. Everything is more or less sand, shaped by the wind, meeting the sea in several bays without any vegetation destroying your impression of really being in Sahara.

But while accommodation is very difficult to come across, eating is better here than anywhere else in Mauritania. There is one simple explanation to this: Foreign fishing vessels exploiting the deep sea fishing outside the Mauritanian coast. As these often need a harbour, as well are obliged to land and process a certain percentage of their catch, many foreigners enter the streets. They want a decent meal, but sleep on their vessels, of course.

Daily air connections to Nouakchott, but you can also get to Las Palmas on the Canary Islands, Spain. You can travel with one of the trucks or Land Rovers that go overland to Nouakchott (30-50 hours), and the price is normally US$20 to US$30, but prices are not fixed. Pay on arrival, and charge the drivers if you help with repairs en route. Faster connections to the south is with the train to Choum (about 250 km south of Zouerate), and use overland transport from there. This is far cheaper as well. But for travellers with time, the direct connections south is a fantastic experience. Going north into Morocco, you cannot rely on any form of public transportation, but check around with travellers going this way (which happens to be quite unlikely due to the strict policies of Mauritanian border police).