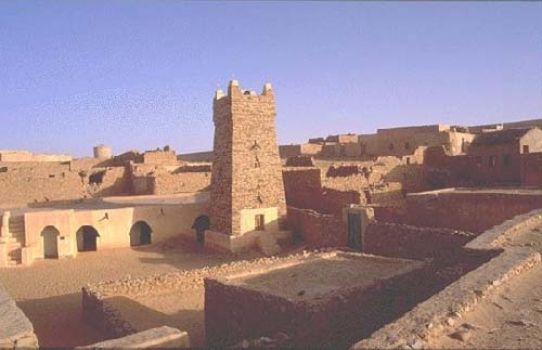 Guide
,
Mauritania
Only a handful of families remain. Once this was a glorious city, rich and thriving. And giving birth to a culture of great imagination, of which there still are quite evident traces.The architecture, distinct for the Tagant region, and better represented than in Tidjikja, is the main attraction of Tichit. 20-30 houses are still standing in good conditions, and are highly ornamented. The houses has the ornamented and intricate niches, that are typical for the Tagant region. The doors of some of the houses are another great attraction, made out of heavy and solid imported wood and with heavy bolts and latches.

Tichit was founded in the 12th century, and was for long an important trading centre for salt.

The organisation of Tichit tells a lot of the history of the village. To the north, is the Shurfa quarter, where greenish stone is used, probably as an expression of the tribe of the Shurfa`s claim of decendancy to the Prophet. Red stone is used in the southern quarter, where the Masana tribe lived. This was the blacks of the region. White stone was used for larger buildings. The Masana tribe was the largest, and they were considered good merchants, and they kept, and still keep, slaves. It must be underlined that the conditions for the slaves in most cases resembles more the ones of a contract worker (on lifetime), than the American slaves.

In ancient times (we`re counting 3,000 years and more now), Tachit was near the lake of Aoukar, a lake of 50,000 kmІ. All that now is left is the salty surface, which is slowly eroded, and which is a continous theat to Tichit.

The date harvest of Tichit is in the hottest summer, in July, when the fairly extensive palmeraie south of the village is the centre of all activity.

Of more attractions, there are nearby rock paintings, as well as more ruins. Of these, Akreijt, to the east of Tichit is the most interesting.

Nothing. You will have to rely on camping outdoors and survive on your own provisions.

All transports will have to be arranged privately. There are of course erratic forms of transport to or from Tichit, but this is clearly a place to get stranded.