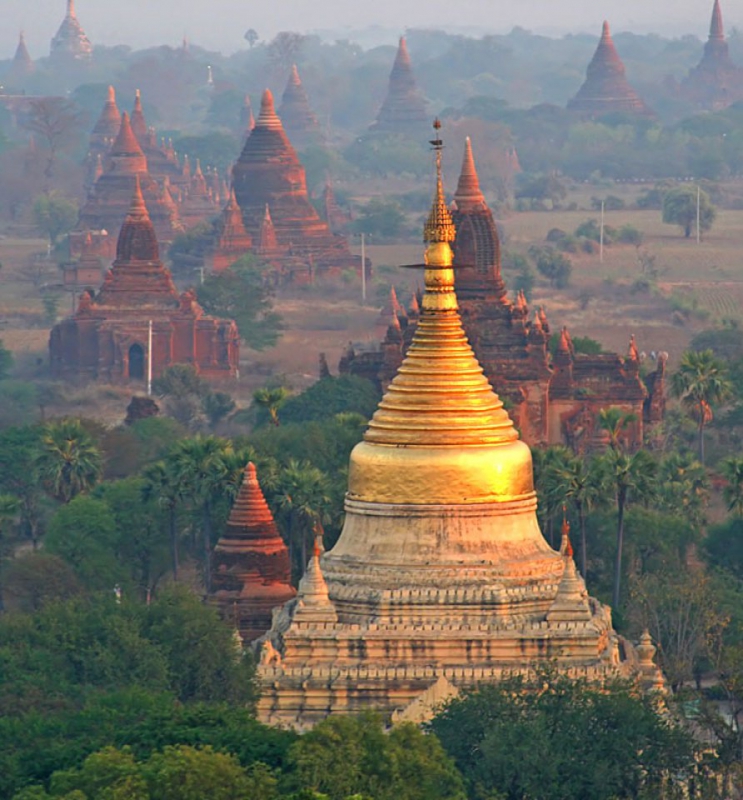 Guide
Myanmar is the land with glittering golden Pagodas and is also known as Suvannabumi or "Golden Land. The Country is unique in so far it has managed to preserve its beautiful natural environment, traditional customs and ancient cultural heritage unlike so many countries where concrete has been the order of the day. The British called the country Burma, presumably after the majority race the Bamar, but the name Myanmar was the official name of the country since at least the time of Marco Polo. Myanmar again became the official name in 1989 although some still use the colonial name Burma

Occupying the largest area on the South-East Asian peninsula, Myanmar is one of the most pleasant places created by Mother Nature. It has an area of about 680,000 square kilometres - roughly equal to France and the United Kingdom combined - and is inhabited by a population of over 53 million people belonging to 135 national races. Myanmar shares common borders with China in the north and the north-east, Laos in the north, Thailand in the north and south-east and India and Bangladesh in the west. In the south-west is the Indian Ocean and Myanmar’s coastline extends southwards from where Myanmar and Bangladesh meet to the southern extremity where Myanmar and Thailand meet - making a very long coastline of over 2,800 kilometres.

Myanmar is a forest-clad mountainous country. In the northern part of the Country there are three parallel chains of mountain ranges beginning at the eastern extremity of the Himalayas and running from north to south: these are the Rakhine Yoma, the Bago Yoma and the Shan Plateau. In the northernmost extremity of Myanmar in Kachin State is Hkakabo-Razi which, at 5881 metres, is the highest mountain in South-East Asia. In the southern part of the Country there is the Tanintharyi Yoma. The northern mountain chains divide the country into three river systems: the Ayeyawady ("Irrawaddy"), the Sittoung and the Thanlwin. The Ayeyawady, the most important river, is about 2170 km (1350 miles) long, and its major tributary, the Chindwin, 960 km (600 miles): they constitute the greatest river system in the Country. As there is very little rain in the central dry zone the Chindwin and Ayeyawady rivers are very important for the irrigation and general economy of these lands, rather like the River Nile is in Egypt. As the Ayeyawady enters the sea it forms a vast delta of 240 km (150 miles) by 210km (130 miles). With these mountain chains and river systems, the country can be divided into seven major topographic regions: the Northern Hills, the Western Hills, the Shan Plateau, the Central Belt, the Lower Myanmar Delta, the Rakhine Coastal Region and the Tanintharyi Coastal Strip.

Myanmar is singularly the most forested in South-East Asia and is actively pursuing the prevention of the deforestation of rainforests which has occurred and is still occurring in most parts of the region. Rainforest and Destruction are two words which go hand in hand in most parts of Asia but this is not so in Myanmar: one only has to do a trip across the Rakhine Yoma or around the mountains of Dawei to see the plentiful abundance of the rainforest in Myanmar.

More ...
Take a trip to Myitkyina to see the world in the wild, or climb Mount Victoria in the mountainous Chin State which has recently been opened up to eco-tourism. Visit Moeyongyi Lake - a 40 square mile Bird Sanctuary - the best time to visit is from November to February when you can expect to see at least 10,000 birds!! Even in the dry zone there are Nature Reserves such as Lokananda a small reserve in Bagan.

Then there is the Myaing Hay Won Elephant Camp at the end of the Bago Yoma not far from Yangon on the road to Pyay (Prome). Or the newly-created Elephant Reserve in the Rakhine Yoma between Thandwe and Gwa with an area of 678 square miles.

And now the designated Nature Reserve of Hukawng Valley has been extended to 20,000 square kilometres and will be the largest Tiger Reserve in the world.

Most of the population live in the Central Belt, (Sagaing, Magway and Mandalay Divisions), the Lower Myanmar Delta and the Shan Plateau. Seven other nationalities have States of their own. The Kachins live in the Kachin State and the Northern Shan State; the Kayahs live mainly in the Kayah State. The Kayins have mostly become intermingled with the Bamars and the Mons, while the rest live in the delta region and the lowland Sittoung Valley. The Chins live in the Chin Hills and also in the dry zone west of the Ayeyarwady; the Mons live mainly in the South-East of Myanmar while the Rakhines, who speak and write Myanmar but with a different tone and accent, have their own State which lies in the coastal region of the Rakhine Yoma. The Shans live mainly in the Shan Plateau area. Yangon is very cosmopolitan and most races can be seen there.

About 90 per cent of the population, mainly Bamars, Shans, Mons, Rakhines, and some Kayins, are Buddhists, while the remainder are Christians, Muslims, Hindus and Animists. The Christian population is composed mainly of Kayins, Kachins and Chins. Islam and Hinduism are practiced mainly by people of Indian origin.