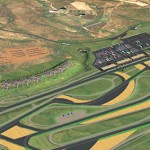 FORMER F1 driver Mark Blundell plans to drive on the planned Tenerife Island Circuit – before construction of the racetrack even begins!
Blundell, who spent nearly 20 years competing in top-class motorsport, including Le Mans, met Cabildo President Carlos Alonso during Tenerife’s press conference launch of the much-heralded earlier this month at London’s RAC Club.
Alonso invited bids for the construction and operation of the track with a Request for Proposals (RFP), suggesting a necessary investment of 25.7m euros.
Deadline for bids is 3rd February next year, so construction will not begin until spring at the earliest. But Blundell simply cannot can’t wait – he’ll be testing the proposed track long before then.
Eduardo Pintado, the Cabildo’s Commerce Councillor overseeing the giant plan – and an ex-racing driver himself – spoke about the Sixties’ British stars who inspired his own passion for motor racing.
These racing legends left their mark in Tenerife in that decade, when world-class events were held in the streets of Santa Cruz and Puerto de la Cruz.
And the legacy left behind by these drivers cemented them firmly in Tenerife’s automobile hall of fame.
Blundell, replying to Pintado, said: “I’d like to follow in the footsteps of those historic British drivers in Tenerife, and be the first to race around the new circuit.”
He will be granted his wish during a trip to the Island next month, when he intends to complete a timed lap of the marked-out Atogo circuit. But in a 4 x 4 off-roader because the designated Atogo area is, and will remain, completely undeveloped then!
The Tenerife Island Circuit is designed for FIA certification, and will stage events on two wheels as well as four.
Blundell said the circuit had “huge amounts of potential to stage some incredibly-exciting races”.
And though the circuit will not be long enough to stage Formula One racing, he will be involved in the project in a consultancy role with MB Partners, his sports management company.
What makes the arena so attractive, apart from the magnificent, all-round scenery, is its availability – less than three kilometres from the South Airport, with easy links to the TF-1 motorway.
And the Atogo site is just a stone’s throw from Los Abrigos, San Isidro and El Medano.
The track will feature 180-degree views of the Atlantic to the South, with Teide’s volcanic range overlooking it from the North.
The combination of striking vistas, sunshine virtually guaranteed, plus an abundance of luxury hotels and leisure facilities close by, makes it an ideal destination for drivers and fans alike.
What’s not to like if you are a motorsport fan?

22 FINES ISSUES ON THE FIRST DAY CHILDREN ALLOWED OUT FOR EXERCISE More
BOAT INTERCEPTED NEAR THE CANARY ISLANDS WITH 4,000KG OF COCAINE ON BOARD More
FOUR HOODED MEN RAID HOUSE IN ARICO More
TORRES OFFICIALLY TELLS SANCHEZ THAT ‘THE CANARIES ARE READY FOR DE-ESCALATION’ More
BE WARNED: ABUSING RULES OF ‘KIDS WALKS’ COULD LEAD TO FINES FROM 600 EUROS More