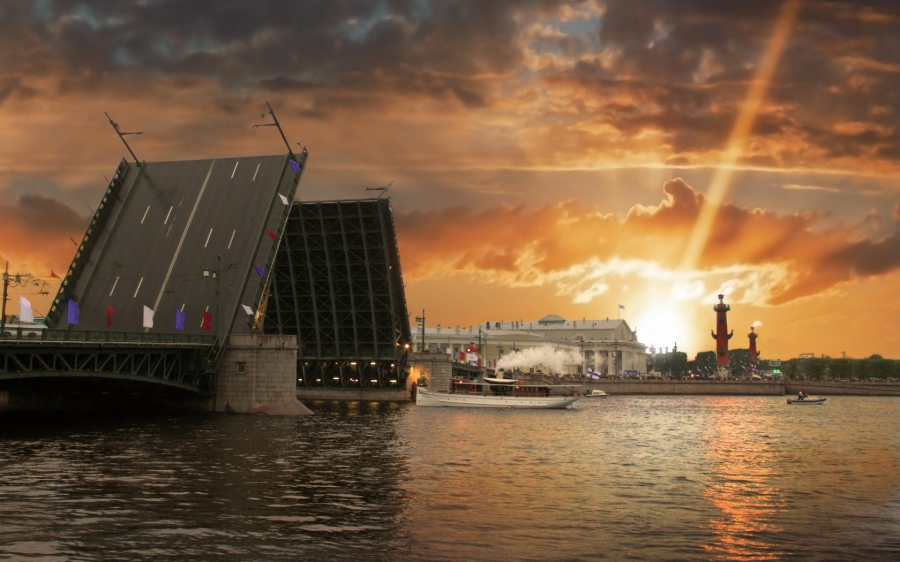 Guide
,
Russia
,
Saint-Petersburg and Region
St. Petersburg Russia is the most beautiful and interesting city in Russia. Founded by Peter the Great and named in his honor, the city has seen many functions throughout the years. It was a retreat of the Tsar and his family during Russia`s imperial years, and all grand imperial residences are still available to tour.

Summer is a special time in Russia’s second, and most elegant, city. It’s also quite a revelation and not what you might expect from a weekend in the world’s largest country. There’s neither a snowflake nor a fur coat to be seen. Instead, it’s dominated by “white nights,” a phenomenon in which the sun never quite sets.

The long and balmy days show the city at its best, with ample time to cruise the canals, roam the museums, seek solitude in the churches and get tipsy on shots of vodka… this is Russia, after all.

But there are surprises far beyond the weather. Strolling down Nevsky Prospekt – St Petersburg’s equivalent of Oxford Street – I was struck by just how, well, un-Russian the whole place felt. Aside from a few Soviet touches on the outskirts, the city’s historic heart is, upon first glance at least, every bit as European as Vienna or Budapest.

In comparison, Moscow – 450 miles away – is Russian through and through, its skyline dominated by formidable Stalinist architecture and the high red walls of the Kremlin. Softer St Petersburg is a perfect introduction to this intriguing and often intimidating country.

My first stop was the acclaimed Hermitage Museum, home to arguably the world’s greatest collection of art. Spread across five buildings, including the exquisite Winter Palace, built in the early 18th Century by Peter the Great, you could easily spend days wandering around the gilded state rooms, admiring works by Picasso and Matisse among others.

If the Hermitage showcases international masterpieces, the nearby Russian Museum pays tribute to local artists past and present. The most impressive treasures of all, however, were on display across town at the new Fabergé Museum in the Shuvalov Palace.

Among the 4,000 pieces on display are a dozen or so Easter eggs made for the imperial family by legendary Carl Fabergé in the late 20th Century. These are no ordinary Easter eggs. Each individually designed and worth millions of dollars, they feature diamonds, gold, rhinestones and silver and open up to reveal a surprise within. My favourite was an egg of transparent yellow enamel, made in 1897 to celebrate Nicholas II taking the throne. Hidden inside is a miniature replica of the carriage used by the tsar at his coronation.

I took stock of these varied treasures over a coffee at Kupetz Eliseevs, an ornate art nouveau food hall with chandeliers hanging from a giant pineapple-esque palm tree in the centre of the room. Milling around, local foodies picked up pricey bottles of vodka and closely inspected tins of Beluga caviar.

I indulged in these two most Russian of delicacies at the Belmond Grand Hotel Europe, home to St Petersburg’s only caviar restaurant. Delicate blinis, each topped with tiny glistening balls of fishy decadence, were presented alongside glasses of potent Siberian vodka.

Thankfully, I didn’t have very far to stumble home. This landmark property dates back to the 1820s and briefly enjoyed a stint as a hospital during the Second World War when Leningrad, as it was then, was under siege.

Just around the corner from the Grand Hotel Europe is the jewel in St Petersburg’s sparkling crown: the Church of the Saviour on the Spilled Blood. Its whimsical onion domes – swirling shades of blue, green and white – loomed against the clear blue sky. Inside, gold reigned supreme. Following a restoration that lasted almost 30 years, it reopened with intricate mosaics of religious scenes and figures decorating every inch. Its unusual name comes from the assassination of Tsar Alexander II that took place here in 1881.

Boats sped along the canal just outside the church. Gliding past the parks and palaces, the castles and neoclassical riverside buildings was a pleasant way to experience the city from a different perspective and a beautiful way to end my time in Russia’s understated but most charming second city.

Saint Petersburg has become the center of learning and culture in Russia. There are many museums here, focusing both on (military) history, art and anthropology. You`ll also be able to look into the past with a tour of the Cruiser Aurora, built around 1900 and famous for the start of the October Revolution. It is still available to see today. If you`re less interested in military history and lean more toward culture instead, you will want to look into the many gardens that bloom in St. Petersburg. In addition to the grounds around the palaces, there are many beautiful sights everywhere around the city.

When Peter the Great first reclaimed the land that would become St. Petersburg, his first action was to build a magnificent fort to protect the area from invasion. This fort, The Peter and Paul Fortress, still stands today, and parts of it are open to the public. The Fortress never needed to defend the city, as all military challenges to St. Petersburg were eliminated before it was even completed. Instead, it became a political prison and city landmark, housing well known authors and political figures like Dostoevsky and Trotsky. There is also a museum and a beautiful cathedral that no historical traveler should pass up. After seeing the first building in the city, you can see the first residence: the Cabin of Peter the Great himself. Known to some as Peter`s Cottage, this small home is nonetheless magnificent. Peter`s original belongings are still on display within the cabin.

You might also want to explore the museum founded by Peter the Great, one of the oldest museums in the world. Officially known as the Museum of Anthropology and Ethnography but also called the Kunstkammer, this magnificent building is dedicated to tracking the development and history of many different peoples worldwide.

St. Petersburg is filled with beautiful and historical treasures, both inside museums and out. The State Hermitage Museum and State Russian Museum both boast impressive collections, the Hermitage museum filled with over three million artifacts from around the world, and the Russian museum with one of the best collections of Russian art on display. The Mikhailovsky Castle Collections focus on 18th and 19th century art with a focus on Russian sculpture.

If you enjoy architecture, you can`t miss the religious buildings throughout St. Petersburg. St. Issac`s Cathedral, built in the mid-19th century, was once the largest cathedral in all of Russia. Although it is now surpassed by the mammoth Church of Christ our Savior in Moscow, St. Isaac`s is still a wealth of beautiful mosaics, sculpture, and artwork. Another major architectural feature of the city, the Church of the Resurrection of Jesus Christ is a wonderful example of traditional Russian architecture, built in a completely different style from St. Isaac`s.

Finally, you`ll want to visit the three major imperial estates in and around St. Petersburg. Peterhof palace was built first, by Peter the Great himself, and continued to serve as a retreat for many generations of Tsars to come. It was expanded to include beautiful gardens and is now a park in addition to a tourist attraction. The next estate to be built was Tsarskoe Selo, or Pushkin, which actually houses two separate palaces. In addition to the beautiful grounds and architecture, Tsarskoe Selo was also the estate to which the last Tsar was exiled after the revolution. The final estate outside of St. Petersburg is Pavlovsk, a magnificent architectural contrast to the other two estates with English style landscaping and design.

In addition to the general history available in museums, St. Petersburg is a great place for a military historian to visit. From the Cruiser Aurora to the Museum of Artillery, Engineers, and Signals, you`ll love learning firsthand about Russian military history and technology. And whether you`re a more casual tourist or very historically focused, you`ll want to see the beautiful gardens and monuments throughout St. Petersburg. The Bronze Horseman and The Alexander Column commemorate the founder of St. Petersburg and the Russian victory against Napoleon respectively. But perhaps the most impressive monument is the Monument to the Heroic Defenders of Leningrad, a strong piece of architecture that is much more than a collection of statues and is entirely dedicated to Russia`s efforts in World War II.

Finally, you`ll want to explore the gardens and bridges that can be found throughout the city. The Alexander Garden and Summer Garden both feature beautiful plantings in addition to wonderful statues in the Alexander Garden, and the first Summer Palace of St. Petersburg in the Summer Garden. More functional and less decorative are St. Petersburg`s two most marvelous bridges: the Trinity and Anichkov bridges. Both are used today, although the Anitchkov is a more traditional stone design dating back to the first days of the city while the Trinity is modern and longer, designed by the man who built the Eiffel Tower in Paris.