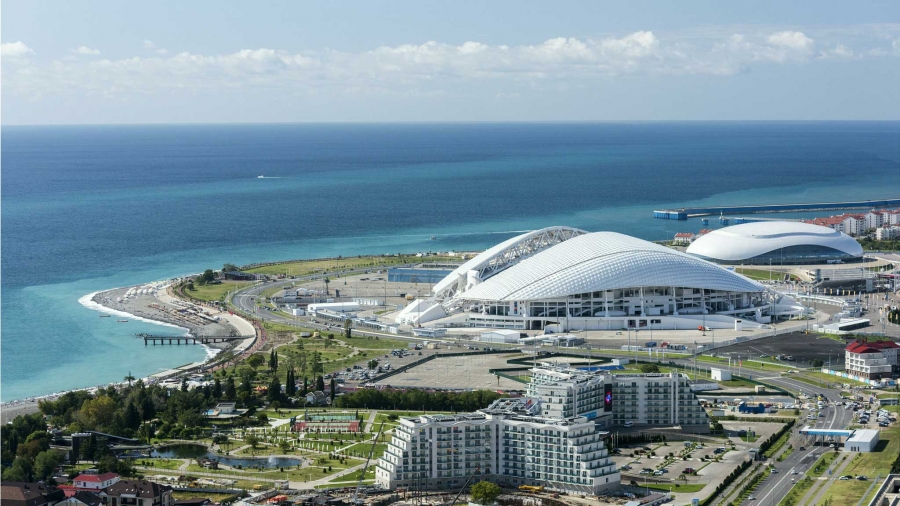 Guide
,
Russia
,
Krasnodarskii krai
,
Black Sea Riviera
Adler is a resort area next to Sochi, located between the rivers of Psou and Kudepsta, 22 km to southeast from Sochi city. The area consists of 31 towns and villages (including Krasnaya Polyana). The area’s total population counts up to 100 thousand people. The place is rich with mineral waters and medical mud. It remains green every day in a year. Therefore the Black Sea coast is called a bank of everlasting spring. It’s all due to highland protecting the coast of northern wind, while the warm breath of the sea is used to soften efficiently local winter. The scientists believe the area of Adler is one of the 10 richest places of the world.

Adler of nowadays has hundreds of hotels and sanatoriums, parks and squares and a great number of archeological and architectural monuments, beaches, site seeing routes and headlines (dolphinarium, aquapark, ostrich and trout farms, bay, caves, canyons, gorge and other worthy things to see).
If you decide to go higher to mountains, you will be surprised with alternation of different landscape and climate belts. The district of Adler stretches from the Black Sea up to eternal snow of the Main Caucasian Ridge.

The history of the region is as great as its nature. Archeologists assert the human appeared at the black sea coast of Caucasus about 350 thousand years ago.

The most known cave station, which is 40-50 thousand years old, has a hard spelling name of Akhshtyr. It is 15 km away from Adler. There were discovered primeval work tools and ancient bear’s, deer’s and other animals’ bones.

Walking around Adler you will run against many restaurants, cafes and casinos. Those of you who like nightlife are not obliged to go to Sochi city for its sake. You may stay in Adler and go for a blow to the local nightclubs Plasma, Mexico, X-Taz, ect.

The airport is the starting point for most people heading to Sochi. It is here, in the Adler region, where passengers branch off in different directions. One convenient alternative to regular road transport is the train, which departs from right outside the airport.

The upcoming Olympic games will raise a number of issues. For example, the amount of passengers arriving in Sochi will need to be taken into account when developing the transport infrastructure. To cope with this, a new railway terminal is being built adjacent to the airport. It will provide a direct route for passengers to the Adler railway station.

Just after boarding, the train will enter a tunnel 344 metres long. The track will measure 2 kilometres 716 meters in total. About a quarter of the route will consist of overpasses. The train will run every fifteen minutes, which will allow for the transportation of more than six thousand passengers per hour. This includes those heading both in the Tuapse direction and to the Olympic sites situated in the mountains and in the region of Vesyoloye.

Aeroexpress trains, operating on the route between Sochi and the airport, stop at the Adler station. A one-way suburban ticket for a journey between Sochi and Adler stations costs RUB 50 and a standard ticket for a journey between the Sochi Rail Terminal and the airport costs RUB 200. For more detailed information about fares, please visit the Fares and Services section of our website. You can purchase Aeroexpress tickets from ticket offices, ticket vending machines, and from company partners. Uniform conditions of carriage for passengers and baggage are applicable aboard all Aeroexpress trains.

Aeroexpress trains run according to the daily schedule, including on weekends and holidays.