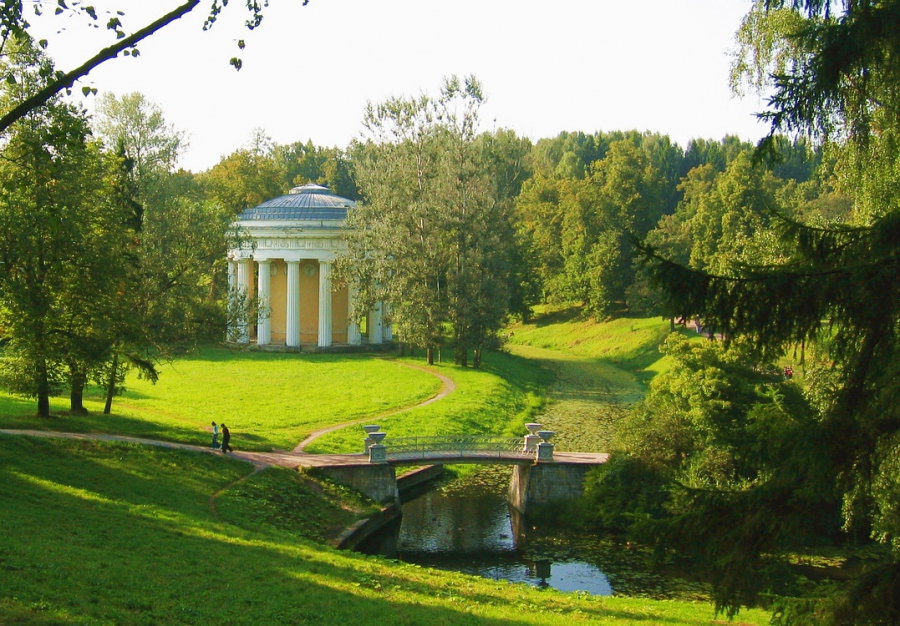 Guide
,
Russia
,
Saint-Petersburg and Region
Pavlovsk is the youngest of the grand Imperial estates around St. Petersburg. Named in honour of Tsar Pavel, this fine neo-classical palace and its extensive landscaped gardens are stamped with his taste and even more so with that of his wife, the German-born Maria Feodorovna. Although there was no love lost between Pavel and his mother, Catherine the Great, it was she who originally presented him with the 362 desyatinas - 607 hectares - of land around the Slavyanskaya River. Perhaps it was the impossibility of living with her son at Tsarskoe Selo, combined with the desire to keep him and his family reasonably close, that prompted her to do so, although the official reason was the birth of her grandson, the future Alexander I.

Although lacking the dazzling splendour of the estates at Tsarskoe Selo and Peterhof, Pavlovsk is well worth visiting both for the treasures in the elegant palace and for the charming, rambling park, which is one of the largest and finest English-style landscape gardens outside the UK.

Both the Park and the Palace at Pavlovsk were victims of wanton destruction during the Nazi occupation, and the extraordinary restoration project was not completed until the mid-1950s. Fortunately, there were extensive blueprints available for all aspects of the estate, so what you see now is almost entirely faithful to the original designs.

The Great Palace at Pavlovsk is somewhat staid in comparison to its near neighbour at Tsarskoe Selo, forgoing that building`s opulent ornamentation for classical elegance and harmony, painted in the deep yellow and white colour scheme typical of St. Petersburg neo-classicism.

That the palace achieved such a harmonious facade belies the fact that it was conceived as a much smaller building, with the design expanded and embellished during construction. The task of designing the palace was originally assigned by Catherine the Great to Charles Cameron, the Scottish-born architect who had won the Empress`s lasting favour with the work he did at Tsarskoe Selo. Construction began in 1782, but Cameron`s modest design and his penchant for the absolute simplicity of Palladianism and the historical purity of Adamesque were not to the liking of Pavel and his wife Maria Feodorovna, and they charged Cameron`s assistant, Vincenzo Brenna, with the task of extending the palace and creating a more imposing and regal building. Brenna quickly became Pavel`s favourite architect, and went on to design alterations on the palace at Gatchina, and the Mikhailovsky Castle in St. Petersburg. His great achievement, both there and at Pavlovsk, was to combine the future Tsar`s eclectic tastes into an organic and harmonious architectural solution.

Brenna`s main addition to the original design was to build sweeping curved wings that make the entire structure almost circular. Designed to be seen from the eastern approach, the wings form a courtyard with a statue of Pavel directly in front of the squat central block. On the ground floor, the wings are a classical colonnade, with niches holding busts between the Doric columns. The floor above, however, is an Italianate latticed arcade. The wings lead to simple square pavilions at either end, and the effect is almost Baroque. The central block, however, is austerely neoclassical. While the lower floor is rusticated, with a row of simple arched windows and two niches containing bronze statues, the upper two storeys are decorated with four pairs of large Corinthian columns stretching up to a Pompeian cornice. The whole is crowned by a large colonnaded drum supporting a copper dome.

Inside, the Palace is considerably more ornate, with state rooms designed by some of St. Petersburg`s most famous architects, including Quarenghi, Rossi and Voronikhin, the first Russian-born architect to make a significant contribution to one of the Imperial palaces. The palace`s interiors are dominated by themes from antiquity, and military motifs designed to please the bellicose Pavel. They include the Italian Hall, which rises up to the building`s central dome, the ornate Grecian Hall, the Egyptian Vestibule, and the contrasting Hall of War, with gilded models of military items, and Hall of Peace, equally richly decorated, but with flowers and musical instruments. Also of interest is Maria Fedorovna`s Library, with a beautiful parquet floor of twelve sorts of wood and elegant furniture designed by Voronikhin.

The southern wing of the Palace contains Pavlovsk`s Picture Gallery, with several notable paintings from the 17th and 18th centuries, including works by Tiepolo, Salvatore Rosa, and Rubens, and the Throne Room, which was actually the Palace`s main dining room, and contains a 606-piece Gold Dinner Service from the Imperial Porcelain Factory. The Hall of Knights and Imperial Chapel bear testament to Pavel`s peculiar relationship with the church - although officially Orthodox, he always preferred the trappings of Catholicism, as can be seen from the lack of icons and the preponderance of statuary in the chapel. The Hall of Knights, meanwhile, was the reception room for the Maltese Chivalric Order of Knights, who fled Malta after Napoleon`s invasion and found sanctuary in Russia. Pavel was particularly proud to become their Grand Master, despite the fact that his appointment could not be recognized by the Pope.

The northern wing of the Palace contains the Imperial family`s private chambers, which are by turns elegant and cheerful, belying the bitter atmosphere of fear and resentment that reigned between Pavel, his wife, and their children.

Opening hours: Daily from 10am to 5pm, closed on Fridays, and on the first Monday of each month in winter (October to April).

Although Pavlovsk`s Park has nothing like the architectural wealth that can be seen at Pushkin or Peterhof, it is one of the most charming and extensive green spaces in or around St. Petersburg, and one of the largest landscaped gardens in the world.

The park`s design, by Charles Cameron and Vincenzo Brenna - and, it is rumoured, Capability Brown - takes full advantage of the rolling countryside around the Slavyanka River`s valley to create delightful vistas of copses, gentle slopes, winding streams and the occasional classical folly.

Right next to the Palace, the Private Garden was restricted to only the Imperial family, and its Dutch-style formalism and beds of brightly coloured flowers are in sharp contrast to the idyllic pastoralism of the rest of the park. The Palace stands almost on the edge of the park, although a small section across the main road contains a stretch of the Slavyanka, with decorations including Cameron`s simple but striking Obelisk and the faintly ridiculous, gothic Marienthal Fortress, another testament to Pavel`s fanatic militarism.

Stretching back to the north and east of the palace, the park covers a massive 607 hectares in total, much of it deep woodland. Although it would take almost a day to explore the whole area, the most interesting sections of the park - and most of the follies - are along the banks of the Slavyanka. From the terrace of the Great Palace, a fine view north reveals the elegant ruins of Cameron`s Apollo Column, several delightful stone bridges across the river, and the circular Temple of Friendhip. Slightly further in the distance, the Vokzhalniye Ponds offer boating throughout the summer.

To the east, the river runs past a number of interesting monuments, including Pavel`s Mausoleum, built by Thomas de Thomon on the orders of Maria Feorovna, although Pavel`s remains are actually interred in the Peter and Paul Fortress, along with the rest of the Romanov Emperors. Also commissioned by the Tsaritsa, the Monument to My Parents is a charming pavilion in honour of her mother and father, the Duke and Duchess of Württemberg. Further south, the Rose Pavilion is a delightful venue for classical music concerts in the summer.

The park at Pavlovsk has been a popular weekend getaway for St. Petersburgers since the advent of Russia`s first railway, which ran from the city to Pavlovsk, stopping at Pushkin on the way. It is the ideal place to come in summer for picnicking, with the size of the park making it always possible to find a secluded spot. In winter, the park is practically deserted, and eerily romantic under a fresh fall of snow.