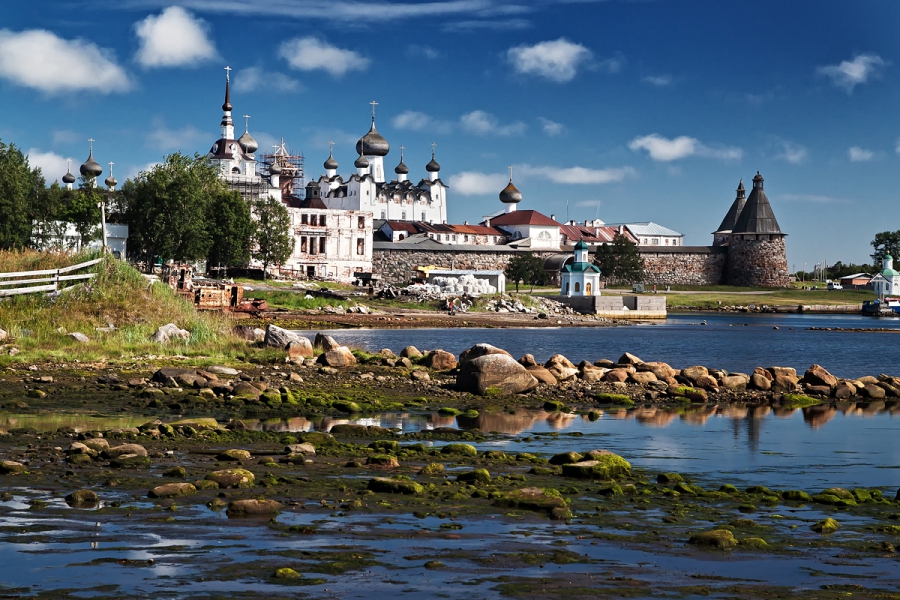 Guide
,
Russia
The Solovetsky Islands (often referred to as Solovki) are six islands located in the waters of the White Sea in northern Russia. It is located just 165km from the Arctic Circle. Founded in the 15th century, Solovetsky Monastery was one of Russia`s most famous and holy monasteries, and became a major pilgrimage destination.

It was also a place of exile, and in the 20th century it was used as a brutal Soviet prison camp at which over a million prisoners died. Soviet leaders of the 1920`s saw the advantage of the islands` isolation and stark climate differently and transformed the archipelago into one of the country`s first gulags. It is still haunted by the shadows of the victims who suffered for their political views in both Imperial and Soviet times, yet its ancient monastery gives the place a unique air of spirituality. The monastery was rehabilitated after the fall of the Soviet , and today the islands` natural beauty, spiritual significance and weighty history draw tourists of all kinds to their shores. During World War II, the Solovetsky Islands were used as a naval base. The monastery reopened in the early 1990s and is once again home to a few monks. Many of the churches and other monastery buildings remain under renovation.

Today, Solovetsky Monastery is a World Heritage Site, museum, and home to a handful of monks. The setting itself is still one of breathtaking natural beauty – wild northern bays and headlands, calm lakes, and deep, thick forests. Situated in the chilly waters of the Onega Bay in the far north of Russia, Solovetsky is off the beaten track, but those who make the effort will not forget their trip.
The most intact building is the Annunciation Church, built at the end of the 16th century and containing the tombs of the saintly founders of the monastery. A climb to the top of the majestic St. Nicholas Church, with an adjoining bell tower, provides a breathtaking overview of the island.

2. Sekirnaya Hill, the Church of Ascension, Commemoration Cross.
Sekirnaya Hill is situated in the north western part of Solovetsky Island. On the top of this high hill, in the 19th century, monks built the Church of Ascension, which was also a lighthouse - it is an unusual church that has a cross on its top and a lighthouse lens under it. In the Gulag times, one of the most cruel punishment cells was located in this church, and in memory of people executed there the Commemoration Cross was later erected.

3. Solovetsky Canals
Solovetsky Island does not have rivers, but it has hundreds of lakes. In the 16th century, monks started to connect lakes with canals. This system of lakes and canals was used as a fresh water resource, for transport and cargo transfers purposes. Nowadays, a good active tour by rowing boats with opportunities to enjoy the nature of the Island is available.

4. Belugas Cape
In summer, white whales (belugas) come close to Solovetsky. Belugas Cape is a place they use to gather.

6. Negotiation Stone.
It was put on the shore of the south western part of Solovetsky in memory of the victory over the British fleet in 1854.

7. Zayatsky Islands
This group of islands has a lot of attractions, including prehistoric sacred labyrinths, burial mounds (presumably, created by proto saami people), a medieval church, household structures and a stone dock. About 90 plant species inhabit the Islands, mostly of a tundra type, including "dancing" birch trees. Gulls and terns colonies, foxes, field voles can be found in the area.

8. Muksalma Island and Muksalma Dam
On the Big Muksalma Island situated to the southeast of the Big Solovetsky, monks used to keep their cattle. To make transportation between the islands easier the monks made a boulder dam. This outstanding hydro engineering facility is about one kilometre long and 6,5 meters thick.

1. «Sightseeing tour on territory of Monastery.»
Duration of the excursion: 3 hours.
Excursion acquaints visitors with history of the Monastery, GULAG exposition, exposition telling story of a team of Northern Navy and Sea Cadet School. Tourists visit territory of the central complex of the monastery, operating temples, the monuments entered into the list a worldwide heritages of UNESCO, objects of economic activities of a monastery.

3. «Exile and imprisonment on Solovetsky Island. Monastic prison»
Duration of the excursion: 1 hour and 30 minutes.
At this thematic excursion visitors learn about Solovetsky Island as a place of exile and imprisonment of known politicians, clergy, Old Believers, intellectuals starting from XVI century up to the 70th of the XX century.
The note: it is a walking tour, it can be combined with other thematic excursions on the territory of Monastery.

1. «Small and secluded Monastery "Svyato-Voznesensky". Mountain Sekirnaja »
Duration of excursion: 3 hours.
Tourists visit one of the highest points of the Big Solovetsky Island. It is Mountain Sekirnuju. From its top the unforgettable view opens to the northern part of the Solovetsky Island and to the White sea. Visitors get acquainted with history and monuments of the monastery where a penal isolation ward was located. It was a place for keeping and punishment of prisoners. Also an unique church with a light-house is there.
Note: Distance by bus: 11 km.
Maximal amount of seats in the bus: 25.
The church on Mountain Sekirnaja is opened for visiting by organized groups from 10.00 till 18:00 routinely; on Sunday from 11.00 till 18:00.
The Monastery is operating, and tourists should comply with requirements of the charter of a monastery and to be properly dressed (women must have long skirts and covered hair).

2. «Botanical garden and desert Makarevskaja»
Duration of the excursion: 3,5 hours – a walking tour; 2 hours – bus excursion.
Tourists will visit one of the most northern botanical gardens of Russia which is located on the territory of former desert Makarevskoj, they will see monuments, unique plants of the various historical periods of Solovetsky Island, they will enjoy with a plentiful view to the ensemble of buildings of the Solovetsky Monastery from a top of Alexander’s Mountain.
Note: Distance from the Central Monastery to the Botanical garden: 4 km. You can choose a type of an excursion: by foot or by bus.

3. «Lakes and channels of Solovetsky Island. A boat trip on a small circle of lake and channel system»
Duration of the excursion: 5-6 hours.
During excursion visitors learn about hydraulic engineering monuments and constructions of the Big Solovetsky Island, the will go along the man-made channels connecting 5 lakes. The distance which will be overcome by boats is 5 – 6 km.
Note: Distance by foot to a boat station: 2,8 km. At boat station, after carrying out of instructing, visitors take seats in boats with capacity of 4-5 persons. They row on their own. The excursion is done under favourable weather conditions.

4. «Nature of Solovetsky Island and Beluga Watching»
Duration of the excursion: 6 hours.
It is a hiking tour along an ecological path to a shore of the White sea to the Belugas Cape. Tourists will get acquainted with varied landscapes, with specialties of a climate, learn about an animal and flora of Solovetsky Island, they will have the opportunity to observe white whales. Solovetsky Island is one of several places on the planet where white whales comes for reproduction of posterity.
Note: The excursion is done from June, 15th till August, 15th. During this period the white whales come to the shore of the Big Solovetsky Island. First part (7 km) is done by bus up to a start point of the ecological path. Then tourists go by foot for 6 km more accompanied by a guide. White whale watching depends on time of an ebb-tide: we need Low-tide. That is why the excursion time if not stable. When the weather is stormy, white whales do not approach to the shore. And nobody is able to guarantee the presence of white whales, of course.
It is recommended to have convenient sports footwear and clothes, ointment from mosquitoes, the field-glass is desirable.
(Boat excursion is impossible).
The excursion is combined (bus and foot), a maximal amount of seats in the bus is 25. The minimal amount of participants is 15.

1. «Places of interest of the Big Zajatsky Island»
Duration of excursion: 3,5 hours.
It is a boat trip to the Big Zajatsky Island. Tourists visit the biggest pagan sanctuary dated by the II-I millennium B.C.; they will see stone labyrinths, a complex of the cult and funeral constructions, the first in Russia stone harbour, monuments of Andreevsky Monastery.
Note: time of boating: 45 minutes one way.
The excursion is done under favourable weather conditions.