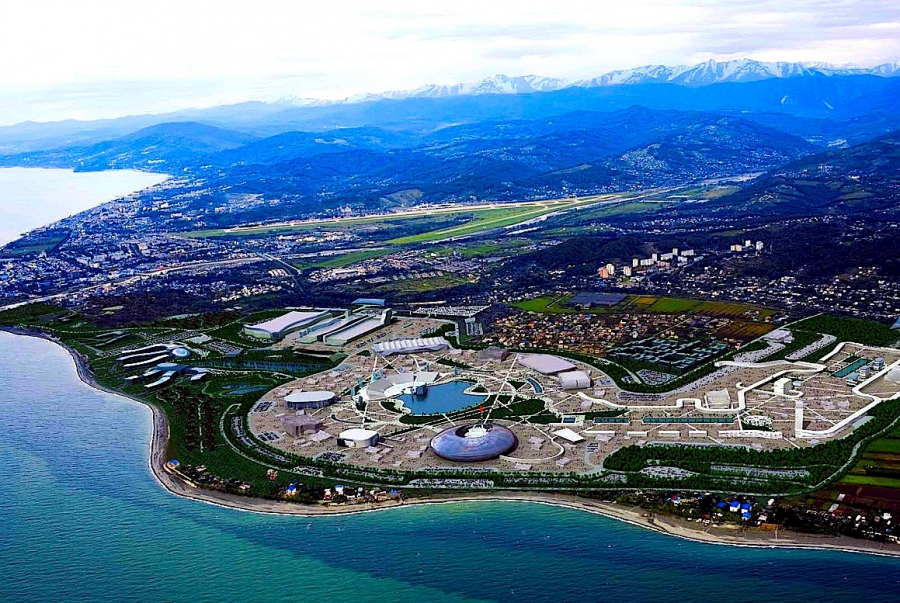 Guide
,
Russia
,
Krasnodarskii krai
Russian Riviera or Greater Sochi, located on the Black Sea in the southern part of Russia, has been a resort city since the time Stalin. With its subtropical climate and proximity to the beach as well as mountains, Sochi has attracted vacationers for decades.

Sochi is the only Russian resort city located in the oasis of humid subtropics. It is over a century that the Russians find Sochi holidays most attractive. Sochi’s geography and climate are unique. Located on the same latitude as the Adriatic, Italian and French Rivieras, the resort city of Sochi does not lag behind the world’s most famous resorts by its curative phenomena. Her Majesty Nature seems to have taken particular care about resourcing this magnificent city of health and festivals, which is also developing as a promising ski-resort.

The warm Black Sea, the unique landscapes and the healthy climate attract millions of Russian and international tourists to Sochi holidays. Legendary spa waters and springs, a solid base of scientific research in spa treatment, the curative power of natural resources and the advanced methods of health service and recreation make Sochi holidays highly recommended for health.

Ski tracks in the mountains, rafting on white rivers, paragliding, canyoning, jeeping, speleo/cave expeditions and hiking tips, and exciting excursions – this is another attraction of Sochi holidays.

The history of Russian resorts started 250 years ago, when Peter the Great having visited European spas, ordered to search for mineral waters in Russia. Soon the Caucasian mineral water springs were explored.
Sochi as a spa resort was founded in early XX century.

In 1902 the first spa facility was constructed for curative Matsesta baths. In 1909 the first resort hotel “Caucasian Riviera” opened its doors to the guests who were pleased to discover at their service there: an electro-light-therapy clinic, a spa bath building, a laboratory, a concert hall, a casino, a restaurant, a café and a library.

The dynamic development of the climatic and spa resort facilities continued through the dramatic years of political changes in Russia. The new Soviet government declared Sochi a health resort of national importance and one of the priority projects. Since 1933 Sochi became a huge national construction site. Sochi’s palace-like resort ensembles, theater buildings, stations and viaducts were designed by outstanding architects I. Zholtovsky, A. Shousev, V. Schouko, C. Tchernopiatov and other great artists.
Nowadays Sochi is a beautiful modern city with its developed infrastructure, evergreen subtropical parks, advanced hotels and resorts, famous Matsesta spa facilities. Krasnaya Polyana, a settlement in the snow-capped mountains in the suburbs of Sochi, is a popular ski resort and a new resource of active rest and health for Sochi’s guests. Is there any other place on the globe, apart from Sochi, where one can swim in the sea in the morning and ski in the mountains in the afternoon?

Now that Sochi has been chosen for the 2014 Winter Olympic Games, developers are focusing on making the city ready for this event. Their focus will be to increase the city`s capacity for tourism, to build venues for athletic events, and to make the city attractive for both visitors and television viewers. In the run-up to the 2014 Winter Olympic Games, developers and planners are making an effort to increase Sochi`s popularity with tourists permanently.

Flights from the United States to Sochi are likely to take visitors through Moscow first. From Moscow, trains also run regular routes.
Sochi`s airport is Sochi International Aiport, which is undergoing renovation in preparation for increased traffic related to the 2014 Olympic Games.

More ...
Trains run daily from Moscow, but expect a 30+ hour ride. Most likely, you`ll want to book a sleeping car if you choose this option for getting to Sochi. However, the Moscow-Sochi line`s renovation is a part of Russia`s plans to make Sochi more accessible for visitors, so the current train schedule may be adjusted to accommodate line changes and traffic demands.

Hotels in Sochi are plentiful, and they are typically most expensive during the warmest season, May through August. Expect prices to increase for the 2014 Winter Games, to be held in February of that year.
Hotels in Sochi: Compare Prices
What to Do in Sochi

Sochi, being a resort city, has many nature-focused activities and activities that will appeal to families, as well as shops and clubs. Water parks, aquariums, an arboretum, and a couple of museums will help fill time not spent at the beach.

Going to a Sochi sanitorium, a tradition begun by Soviet workers, can also be enjoyed. The sanitoriums require a medical referral but can otherwise be likened to an all-inclusive spa experience, complete with meals, health treatments, and relaxation at the beach. Vacationers who visit Sochi with the goal to de-stress may find this to be on their to-do lists.

Those who fancy skiing may also do so. Krasnaya Polyana (Red Valley), the mountain that serves as Sochi`s backdrop, has been turned into a ski resort. Attention to the sophistication and safety of ski and other winter-related sports facilities will increase in preparation for the Olympic Games. In addition, a railway to connect Sochi with Krasnaya Polyana is set to be built to accommodate easy transfer between the two locations.

Sochi 2014 will be the most compact Winter Games in the history of the Olympic Movement. It will be possible to get from one venue to another in just a matter of minutes and all Olympic and Paralympic competition will take place in the same venues. It is for this reason that all athletic facilities for the Sochi 2014 Games are being built with the needs of disabled people in mind.

Eleven athletic venues will be built for the Sochi 2014 Games, which will be divided into two clusters—mountain and coastal. The clusters will be located within 48km of each other, which is less than a 30 minute ride along a new railway.

The central focus of the coastal cluster will be the Olympic Park. It will connect up all competition venues, the parking zone and the infrastructure elements. For the first time in the history of the Olympic and Paralympic Games, all ice arenas will be within walking distance of one other. The Olympic Park will be able to accommodate about 70,000 visitors when full.

The Mountain Cluster will include Biathlon and Ski Complexes, a Bobsleigh Track, a Ski Center, a Ski Jump Complex, as well as a Snowboard Park and Freestyle Center.