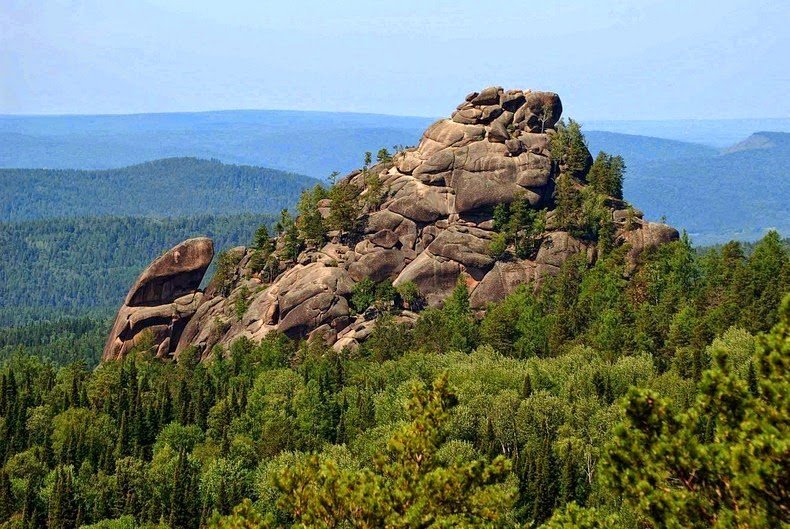 Guide
,
Russia
"Stolby" (Pillars) Nature Reserve is located on the North-West spurs of the Eastern Sayan that border the Central Siberian Plateau. The right tributaries of Yenisei River are the natural boundaries of the protected area. From the North-East the area borders the Krasnoyarsk agglomeration.

The Nature Reserve was founded for preservation of the natural complexes around picturesque syenitic outliers — the so-called «pillars» with a height of 600-700 meters. There exists on the Reserve territory the special tourist-recreation area that is opened for the tourists` visits.

Due to the geomorphologic zoning the territory of the Reserve lies in the contact zone of the Central Siberian Plateau, West-Siberian Plain and Altai-Sayan Mountains. The height of the rocks reaches 60-90 meters. The rock formations are represented by sedimentary and volcanogenic thicknesses that have the age starting from Cambrian (more than 600 million years) till the Carboniferous period.

"Stolby" Nature Reserve is located on a junction of three botanic-geographical regions: Krasnoyarsk forest-steppe, mountain taiga of the Eastern Sayan and sub-taiga of the Central Siberian Plateau. The Reserve flora numbers 1037 species of the vascular plants. 260 species among them are mossy; more than 150 species refer to the category of especially protected ones. Among 8 forest-creating breeds the pine (41%) and fir (28%) forests predominate. The largest part of the planting was traversed by ive cuttings in the years 1940-1950. The originality of fauna in the Reserve is conditioned by its position in the center of a "junction" created by European-Ob and East-Siberian zoogeographical sub-regions as well as by Altai-Sayan mountain taiga, forest-steppe of the Krasnoyarsk hollow and subzone of the Siberian Southern taiga. Species of Western regions of the Siberian South predominate in the fauna of the Reserve.

Stolby national park was founded to study the natural processes in the region. The park has very varied nature and a lot of species of plants and animals. It is a truly clean and pleasant place. The main attraction of the park are its cliffs that have strange curved forms, as if they were worked on by water. Because of the peculiar landscape Stolby became the local center of cliff-climbing. The original way of cliff-climbing invented by local sportsmen (called "Stolbisty") was acclaimed worldwide.
Every weekend there are a lot of people in the park and it is a great place to take a break from the city.

It takes about 1 hour to go there and back from the railway station (if there`s no traffic jam, costs about 250R (€8) both ways). Don`t take a taxi at the railway station or the airport - it`s too expensive. It`s better to order a taxi, it will come in 15 minutes.

See taxi companies` contacts in Krasnoyarsk Transport section. The cars can`t go further the beginning of the park, but for 50R (€1.7) you can enter as far as Taletino check-point, which is about 2 km (20 mins walk) away. To get to the most interesting place in the park (which is where the cliffs are), you will need to walk about 1.5 hours from Taletino check-point. If you are lucky an occasional car will give you a lift, but it`s rare.

Once you get to the main check-point Narym, you can walk around and enjoy the views on the cliffs. There are refreshment shops along the way, where you can buy a map of the park also. Accommodation can be arranged at Narym kordon, but only if you have your own tent. Otherwise, it`s forbidden to camp and to make in the whole national park.