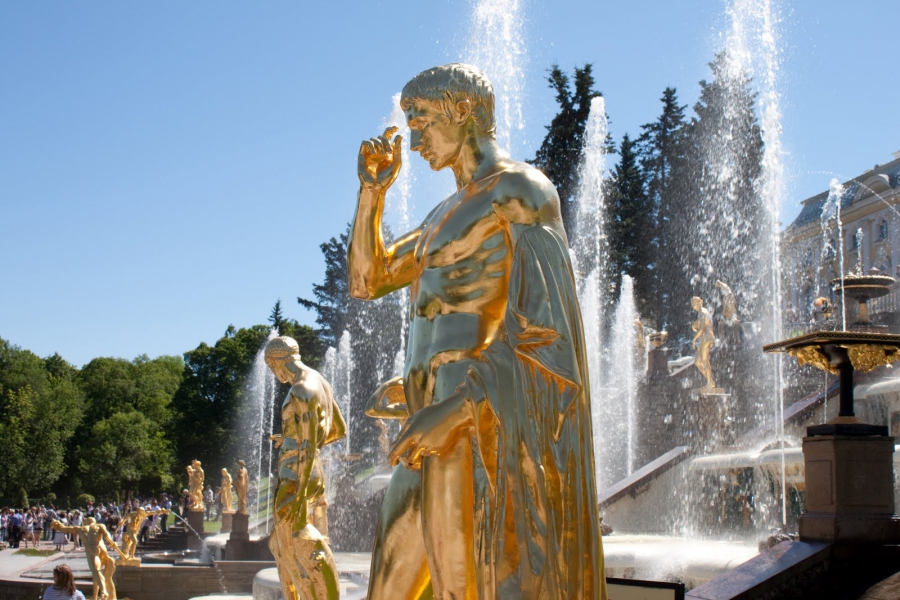 Guide
,
Russia
,
Saint-Petersburg and Region
One of St. Petersburg`s most famous and popular visitor attractions, the palace and park at Peterhof (also known as Petrodvorets) are often referred to as "the Russian Versaille", although many visitors conclude that the comparison does a disservice to the grandeur and scope of this majestic estate.

Versailles was, however, the inspiration for Peter the Great`s desire to build an imperial palace in the suburbs of his new city and, after an aborted attempt at Strelna, Peterhof - which means "Peter`s Court" in German - became the site for the Tsar`s Monplaisir Palace, and then of the original Grand Palace. The estate was equally popular with Peter`s granddaughter, Empress Elizabeth, who ordered the expansion of the Grand Palace and greatly extended the park and the famous system of fountains, including the truly spectacular Grand Cascade.

Improvements to the park continued throughout the 18th and 19th centuries. Catherine the Great, after leaving her own mark on the park, moved the court to Pushkin, but Peterhof once again became the official Imperial Residence in the reign of Nicholas I, who ordered the building of the modest Cottage Palace in 1826.

Like almost all St. Petersburg`s suburban estates, Peterhof was ravaged by German troops during the Second World War. It was, however, one of the first to be resurrected and, thanks to the work of military engineers and over 1,000 volunteers, most of the estate`s major structures had been fully restored by 1947. The name was also de-Germanicized after the war, becoming Petrodvorets, the name under which the surrounding town is still known. The palace and park are once again known as Peterhof.

The fountains of Peterhof are one of Russia`s most famous tourist attractions, drawing millions of visitors every year. Fountains were intrinsic to Peter the Great`s original plans for Peterhof - it was the impossibility of engineering sufficiently powerful jets of water that prompted him to move his attentions from the Strelna site to Peterhof - and subsequent generations competed with their predecessors to add grander and ever more ingenious water features to the parkland surrounding the Grand Palace.

The most famous ensemble of fountains, the Grand Cascade, which runs from the northern facade of the Grand Palace to the Marine Canal, comprises 64 different fountains, and over 200 bronze statues, bas-reliefs, and other decorations. At the centre stands Rastrelli`s spectacular statue of Samson wrestling the jaws of a lion. The vista of the Grand Cascade with the Grand Palace behind it, the first sight to great visitors who arrive in Peterhof by sea, is truly breathtaking. The Grotto behind the Grand Cascade, which was once used for small parties, contains the enormous pipes, originally wooden, that feed the fountains.

Elsewhere in the park, the range and diversity of fountains is astounding, from further monumental ensembles like the Chess Cascade and the Pyramid Fountain, to the ever-popular Joke Fountains, including one which sprays unwary passers-by who step on a particular paving stone.

The official opening of the fountains at Peterhof, which usually takes place at the end of May, is an all-day festival, with classical music, fireworks and other performances, as each section of the park`s fountains is turned on one by one.