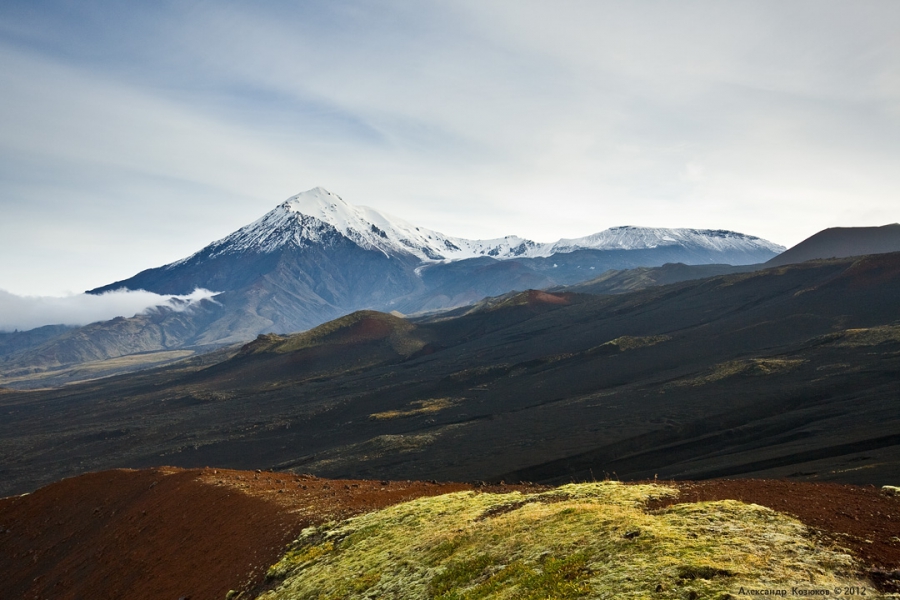 Guide
,
Russia
The massive Tolbachik basaltic volcano is located at the southern end of the dominantly andesitic Kliuchevskaya volcano group. The Tolbachik massif is composed of two overlapping, but morphologically dissimilar volcanoes. The flat-topped Plosky Tolbachik shield volcano with its nested Holocene Hawaiian-type calderas up to 3 km in diameter is located east of the older and higher sharp-topped Ostry Tolbachik stratovolcano. The summit caldera at Plosky Tolbachik was formed in association with major lava effusion about 6500 years ago and simultaneously with a major southward-directed sector collapse of Ostry Tolbachik volcano. Lengthy rift zones extending NE and SSW of the volcano have erupted voluminous basaltic lava flows during the Holocene, with activity during the past two thousand years being confined to the narrow axial zone of the rifts. The 1975-76 eruption originating from the SSW-flank fissure system and the summit was the largest historical basaltic eruption in Kamchatka.

An explosive eruption began at Tolbachik volcano on 27th November 2012. Ash was reported to a height of 33,000 ft drifting north and northwest of the volcano. The height of ash emission was estimated from seismic records. Ashfall was reported at villages 35 km west of the Tolbachik to a depth of 4 cm. A 4-5 km fissure occurred at Tolbachinsky Dol with Strombolian eruptions at 4-5 vents. A 6-7 km fissure occurred at Plosky Tolbachik with Strombolian eruptions at 2-3 vents. Ashfall, booming noises and rattling windows were reported in nearby towns.

During the peak activity at Tolbachik on 28-29 November 2012 eruptive fissures spread over tens of kilometres, and the eruption was heard 60 kilometres away. The eruption was similar to the Great Tolbachik Fissure eruption in 1975-76, but lower in intensity. A fissure 5 kilometres long formed on the southern slope of the Plosky Tolbachik, in the same area as 1975-76 eruptions, but at a higher elevation – about two thousand metres above sea level. Two active centres produced lava flows. A 10 kilometre long lava flow destroyed a monitoring station of the Institute of Volcanology and Seismology on Vodopadny creek, as well as the Leningradskaya station of the institute. A base of the Volcanoes of Kamchatka natural park was destroyed in the same area. Ashfall from Tolbachik volcano was reported 65 kilometres from the volcano up to a depth of 4 cm.

The large 1975-1976 fissure eruption at Tolbachik commenced on July 6, 1975, 18 km southwest of Plosky Tolbachik volcano. It was the largest historical basaltic eruption in Kamchatka. Eruption vents were located along a 28-km-long fissure. From July 6 to September 15, 1975, the eruption occurred from the North vents. The activity consisted of the formation of a chain of cones up to 330 m high, effusion of lava and collapse of Plosky Tolbachik caldera. From September 17, 1975, to December 10, 1976, the eruption continued at South vent, 10 km southwest of the North vents. From South vent lava flows covered an area of about 35 sq km.

The 1975-76 eruption of Tolbachik was accompanied by intense volcanic tremor. The tremor correlated with the stages of eruption. An increase in volcanic tremor occurred along with cone deformation and preceded the lava flow.

Tolbachik volcano contains a series of magma chambers containing chemically different lava. These can erupt in succession during a large eruption.