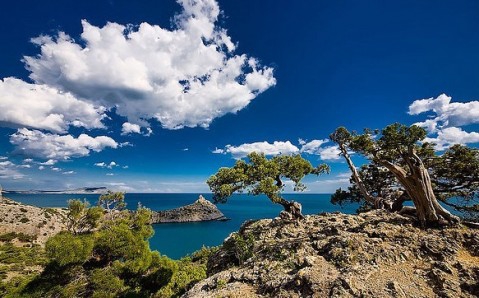 Guide
,
Russia
Crimea is a country of striking beauty - rolling, fertile countryside, with fruit farms and vineyards in the centre give way to the forested gorges and rocky escarpments of the mountains as you travel south towards the beaches of the Black Sea. And below the Yaila mountains is one of the most breathtakingly beautiful coastlines in the world.

The Crimean people are a mix which has been determined by their history. The population of 2.5 million (out of a total Ukrainian population of around 50 million) consists of a majority of Russians and Ukrainians, substantial numbers of Tatars, and smaller numbers of Greeks, Armenians, Jews and Karaim.

Simferopol
When you come to Crimea, you`re likely to arrive by air or train in the bustling, modern regional capital, Simferopol. Simferopol is a thriving commercial centre at the heart of a farming region, with food processing, fruit canning and machine manufacturing industries. But it also has several universities and research institutes, and a lively cultural life with theatres, museums and concert halls all close to the recently pedestrianised town centre.

Like most Crimean towns, Simferopol is in transition. The old certainties of the Soviet era disappeared in the nineties, and the region saw the privatisation of several thousand businesses. The effect of the move to an enterprise economy has been mixed - some people have done well out of it, and new jobs have been created. But the lack of regulation also resulted in a thriving informal or black economy, which has limited the ability of the regional government to raise revenues through taxation. The result has been high tax rates on those who do declare what they earn - which in turn has made people reluctant to have anything to do with the taxman. The knock-on effect is that the regional government has been slow in investing in the infrastructure which is badly needed for further development.

Mikhail is a taxi-driver. Last year he worked `officially` and paid tax, but found that he couldn`t make ends meet. This year he`s working `unofficially` and he`s better off, but worries about his pension. He`s in his late fifties, and if he doesn`t work officially he doesn`t make pension contributions, so his pension will be less. This is the kind of dilemma that faces many individual Crimeans. The dilemma facing the regional government is how to raise money while not undermining the average Crimean`s buying power.

Foreign investment has been slow, and the government has created special economic zones, to encourage both local and foreign investors through tax concessions, for example in the seaport shipyards and in the chemical industry - Krasnoperekopsk and Saki produce fabric dyes, potassium permanganate, bleach and detergents. There are some indications that this is paying off - that is, the tax revenue generated is more than the cost of the concessions.

A country of contrasts

Crimea is a country of contrasts. In Yalta`s Gastronom food and grocery department store a shop assistant expertly flicks the beads of an abacus to add up the prices - she keeps a calculator under the counter to settle any disputes. In summer Yalta`s streets are full of young women in fashionable clothes (hot pants last year), while weather-worn old women in aprons and headscarves sell home produce on the pavement or simply beg. .People queue to go on the waterslides in the new aquapark at Simeiz in spite of having to pay $30 (25 EUR) for a day ticket. Yet for others $30 (25 EUR) is not far short of a week`s wages.

Simferopol too is a mix of prosperity and the struggle against poverty. New buildings are going up,and older ones are being restored, the shops are well-stocked, there are internet cafes and a good proportion of the young people on the streets are wearing trendy clothes. There is an air of optimism about the place, but within walking distance of the town centre, near the 16th century Kebir-Jami Mosque, the roads are unmade and the housing dilapidated.

Over the last ten years the return of over 250,000 Crimean Tatars - deported to central Asia by Stalin - has presented the administration with a challenge. In the late nineties, the Rada agreed to create a Tatar Council to represent their interests, to create Tatar schools and to recognise the right of Tatars returning from Central Asia to own land. Since 1998, all schools in Bakhchisarai, the previous Tatar capital, have taught the Crimean Tatar language as well as Russian, and a number of purely Tatar schools have opened in the region. Simferopol State University has a Department of Crimean Tatar Language and Literature with some 600 students. But the rate of unemployment is still significantly higher in the Tatar community than it is among the majority Russians and Ukrainians, and progress has been slower than most Tatars would like.

The right of returning Tatars to claim land has been accepted by both the national and regional governments, but there has been controversy over where this land should be. The authorities have given, in general, government-owned land which was previously collectivised, but this has not necessarily coincided with the Tatars` wishes to return to the specific place their families were deported from by Stalin.

Two thousand years ago Crimea exported grain to ancient Greece and today it still produces around a million tons of grain a year, along with sunflower oil and other agricultural products for export.Vineyards like those at Massandra and Inkerman in the west, and Koktebel and Solnechnaya Dolina (Sunny Valley) in the east produce grapes for famous wines which are exported throughout eastern europe. But although farming employs a lot of people, others work in enterprises manufacturing consumer goods - clothes, shoes, perfumes and cosmetics, furniture, and more recently computers and software.

Many Crimeans work in the seasonal tourist trade, which means long hours in summer and then making money as best they can by other means between November and March. During the Soviet era tourism flourished as workers flocked to the south coast`s sanatoria. Built from the19th century onwards in well laid-out park land they are in fact hotels, most with private beaches.

The name sanatorium comes from the south coast resorts` long tradition as health spas. 100 years ago people came to Crimea in the hope that the sea air would help them recover from a variety of illnesses, in particular tuberculosis. Today many of the sanatoria have medical wings for patients with health conditions or recuperating after operations, and in addition offer the full range of health and fitness treatments for their other customers - massage, mudbaths, fitness and weight loss programmes, saunas and so on. Many of the mud and mineral-based treatments are derived from natural mineral springs and medicinal muds, found in the Crimean environment. The south coast resorts are also a favorite holiday destination for people suffering from asthma, tuberculosis or hay fever, as the sea breezes help both these conditions.

Since it became possible for some of their traditional customers - Russians, Ukrainians, East Germans, Poles and others - to travel to the west for holidays after the end of the Soviet , the numbers of tourists have dropped, and some of the sanatoria and hotels are badly in need of new investment. This is not helped by the refusal so far of the regional government to privatise the sanatoria. But the industry is beginning to look westward now for new business - some of the hotels now have websites in English, where you can book on the internet, and a number of Yalta hotels had stands at the International Travel Mart in London last year. The combination of summer sunshine, warm sea, mountains, historic places to visit and the richness of Crimean culture mean that western european firms, particularly from Germany, are already beginning to take an interest. Ukraine has adopted membership of the European as a long-term strategic aim, and encourages these kinds of developments.

Crimeans are hospitable people, and are quick to invite you in if they like you. A meal in a Crimean home is likely to be accompanied by vodka or cognac and frequent toasts - to the guests, to prosperity, to anything that comes up at the time. You will be expected to propose a toast too, so don`t hold back!

The road from Simferopol to Yalta is punctuated by small stalls at the side of the road displaying strings of sweet red onions. Although they are grown throughout Crimea, connoisseurs will tell you that only a certain type is the true Crimean red onion - so sweet that you can bite into it like an apple. Most of them are grown on smallholdings and sold by the growers - direct or through the town markets. The vineyards, on the other hand, are company owned, and have been making classic dry and dessert wines, madeiras and cognacs since the nineteenth century.

Both - the humble red onion and the grapes for sophisticated wines - spring from the same Crimean soil. This is a country with real potential on the threshold of a new century - time will tell what kind of future it will carve out for itself.