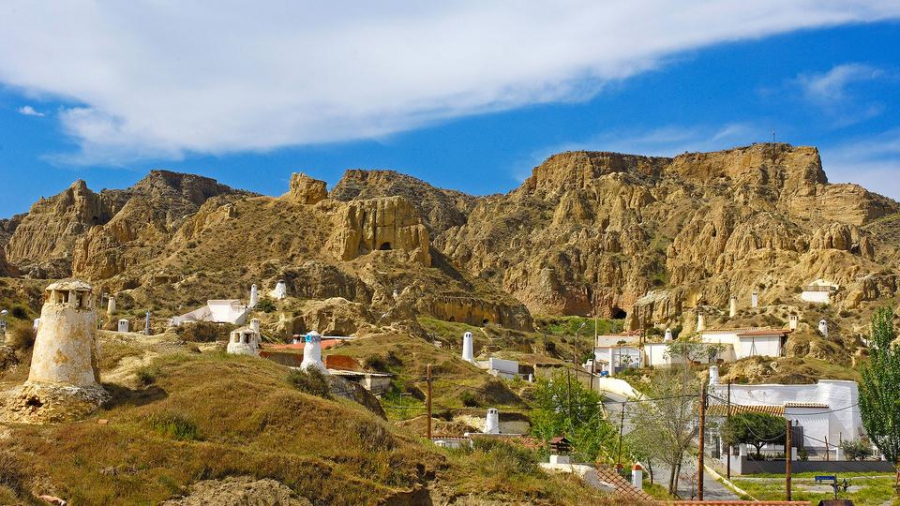 Guide
,
Spain
,
Andalusia
The cathedral town of Gaudix is well off the beaten path, in the eastern confines of the Province of Granada, a large, bustling country town with a personality all of its own. Its history dates back to Phoenician and Roman times, and it played a major role in the Reconquest.

The most interesting feature of the Guadix area is that many of the inhabitants of this large town live underground, in the southern part of the town, in what are known as cave houses. The jagged ochre terrain and the dazzling whitewashed chimneys and doors of the caves contrast dramatically with the snow-covered peaks of the Sierra Nevada, which loom above. The cave district is signposted on the main street of the town as the "Barrio Troglodyte".

Caves quarter of Guadix in Granada The name troglodyte, to me anyway, brings to mind a visual image of prehistoric man living in caves, when actually, today, Granada Province is said to have the largest cave dwelling population in Europe, and Guadix the highest concentration of inhabited caves in Spain.

This intricate maze of homes is not fashioned from natural cavities, it is a man made phenomenon created by the act of human burrowing into the soft sandstone rocks. There is evidence of cave dwellings having existed in this area as far back as the Arab invasion of Iberia in the 8th century, though opinion suggests that the main labyrinth of homes were created in the 16th century and onwards when, after the successful Christian invasion of the region, the Moors, fearing persecution from Caves in Guadix their conquerors, fled from the city into the hills.

Remains of this type of habitation are also in existence in Almeria, particularly around the villages of Sante Fe de Mondujar, Alhabia, Gador, and Benahadux.
The cave district of Guadix is located behind Calle de San Miguel, it is speculated that there could easily be over ten thousand people living in these underground homes. Inside the caves a year round temperature of around twenty degrees Celsius is naturally maintained, while on the outside the summertime highs reach over forty degrees and the winters can frequently see snow.
Today the lower cave homes are thoroughly Troglodyte caves of Guadix modernised, with running water, electricity and domestic appliances of the latest convenience, many of these residences having been extended outwards with extra rooms and terraces. Yet further into the barrio, the only evidence of the more simply designed dwellings are the whitewashed doors, windows, and chimneys scattered along the hillsides. The bizarre landscape, offering an insight into times gone by, is also littered with ancient and abandoned cave entrances.

It is possible to drive around the main part of the neighbourhood, but a little wander on foot is worth the effort. I found the people of cave community of Guadix to be very welcoming and extremely cave proud.
On my visit there, while quizzing one of the helpful locals, Jose, for information, in my rather basic Spanish I might add, I was invited to view and photograph the inside of his cave home, Cave home of Guadix - Cueva Jose how could I refuse such an opportunity!

Cueva Jose had a very lovely outside terrace and seating area, inside the rooms were just like any normal house and fully equipped with wide screen TV, cooker, fridge, etc... Traditional Spanish costumes had been hung up on show in the main bedroom, a touch no doubt intended to impress his visitors, Inside cueva Jose which I thought was quite sweet, Jose was a man proud of both his home and his culture. After a tour of all the rooms Jose directed me to a viewing point on the terrain above his cave from where I had fantastic views of the whole town and far beyond to the Nevada mountains.
I must mention that Jose, along with many of the friendly people of the barrio, has his own little tourist business going on, of which I was fully aware and more than happy to go along with. Jose on his cave terrace During the tour of his cave it would have been hard not to notice the ion of trinkets that were displayed for sale in the entrance hall and the gratuity dish for tips beside the front door.
Excited by the chance to see inside a real cave home, and to practise my Spanish, this was most definitely a few euros well spent.

Cueva Jose is situated close to the Plaza del Padre Poveda, his terrace, overlooking the square, is in a prime spot to welcome passing tourist.

Later, as I was leaving the plaza, I looked over to Joses house and smiled to myself as I saw him welcome two more curious guests into his home.

Plaza del Padre Poveda, Plaza Padre Poveda in Guadix cave areais located at the heart of the old quarter and named after one of its former residents, Father Pedro Poveda. The square is found by following the signs to Cueva Museo and Barrio de las Cuevas.