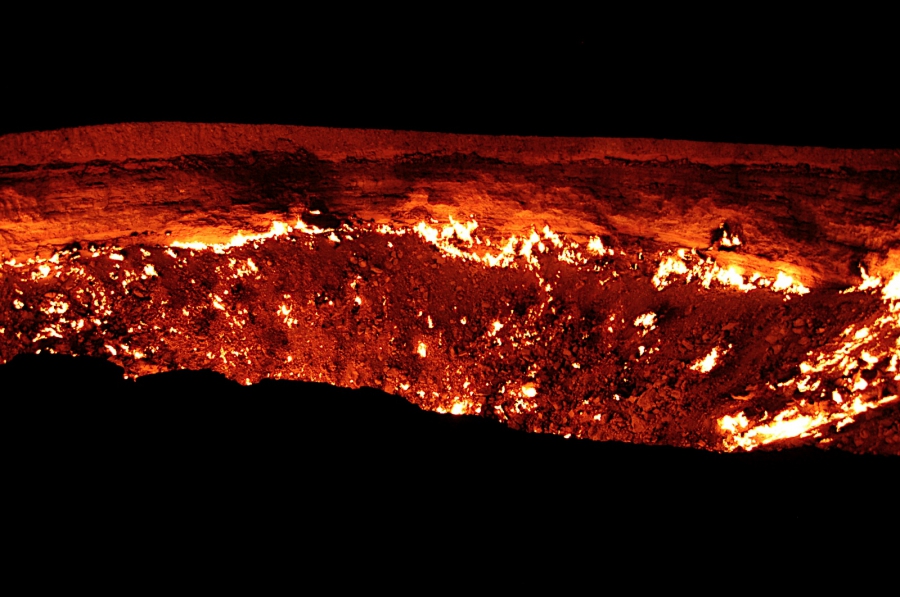 Guide
,
Turkmenistan
There are several places around the world that locals believe are a door to hell. Endless catacombs beneath the city of Paris, France for example or Dimmuborgir lava formations in Iceland. When it comes to sheer jaw-dropping effect, however, The Door to Hell by Darvaza in Turkmenistan takes the cake. I would also classify Darvaza as one of the places that should be on the must-visit list of every serious explorer who likes to visit Earth’s most breath-taking sites. Darvaza is a gas crater the burning gates of which have been flaming for upwards of 37 years.

Darvaza Burning Gas Crater
Turkmenistan is very rich in natural resources. Currently a sovereign country, Turkmenistan was part of the Soviet until 1991. It was during rule of Soviet Russia, back in 1971 when geologists were conducting gas drilling in Kara-Kum desert and discovered an underground chamber close to the village of Darvaza (known in Turkmen as Derweze, but sometimes also referred to as Darvaz). The discovery of the chamber was accidental and resulted in drilling rig collapsing, leaving giant gas crater filled with poisonous gases exposed to the world outside. The concentration of gases within the crater was high so nobody dared to go down there. It was then when someone came with an idea to light the gas in the crater on fire so as to burn it before the poisonous fumes engulf the nearby town of Darvaza.

The geologists thought the idea of burning the gas was smart and went ahead with lighting the crater on fire. As it turns out, the supply of quality natural gas below the crater is near infinite as the crater’s been burning since. At the time of this post, on June of 2009 the gas crater in Darvaza is still burning and has been since 1971 without interruption. No one can even imagine how much quality natural gas was burnt throughout the 38 years of the crater being on fire. No one can estimate how much more gas there still is. When they first lit the gas crater on fire, they thought the fire would go out after a few days. It’s been more than a few day, it’s been more than a few weeks or months. It’s been decades and the gas crater is burning just as it did the day it was first lit. Putting all economical loses from wasted natural gas aside, imagine the ecological impact this burning gas has cause during decades of non stop burning!

The Door to Hell
The locals from Darvaza have given the burning crater a name that suits it well – The Door to Hell. And everyone who visits Darvaza agrees with the name and finds it appropriate. When you look inside the burning gas crater, you do feel like this is what the door to hell would look like. No one dared to enter the chamber when it was first discovered and no one has dared there since. After all, everyone knows what kind of path a door o hell takes you. And it’s not the path anyone would voluntarily want to embark on. Seeing the door to hell with your own eyes, however is an experience like no other. You will have long stayed in awe after experiencing the viciousness of the fire within the gorge of the burning crater. The Door to Hell would be an amazing vacation experience for the adventurous wonderers. This is a vacation idea that your mainstream tour operators don’t know about. And that’s the beauty of it.

Darvaza Location
Darvaza is located in Turkmenistan but many sources mistakenly mention that it’s located in Uzbekistan. Uzbekistan is a country next to Turkmenistan and Darvaza is definitely not located there. Which is a good thing as there have been travel warnings for Uzbekistan for a long time, urging all travelers to avoid the country due to high risks of terrorist attacks and/or civil disturbances. But Uzbekistan is not where Darvaza is.