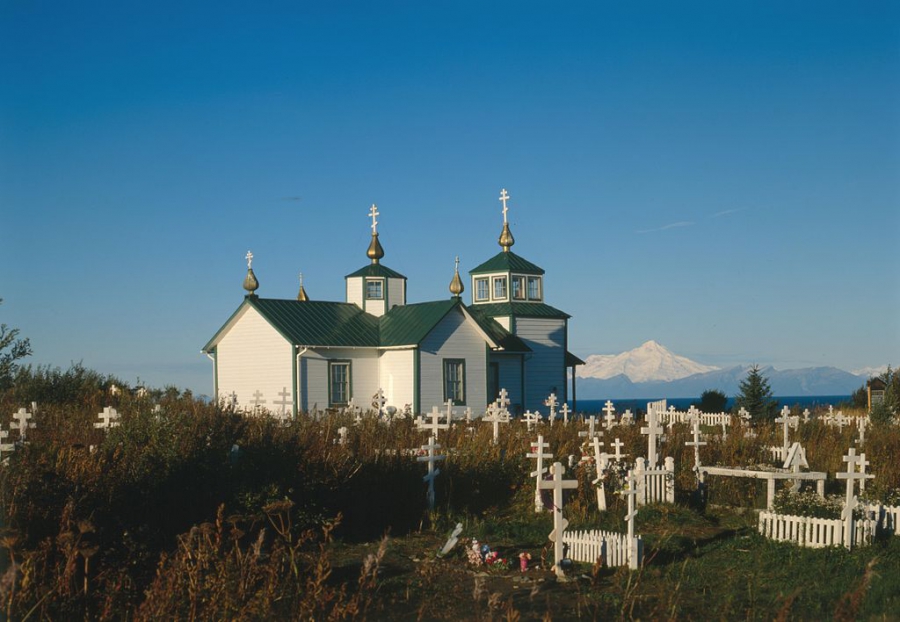 Guide
,
USA
,
Alaska
Centrally located on the Kenai Peninsula, Ninilchik is a beautiful 180 mile drive south of Anchorage. Ninilchik extends north and south along the Sterling Highway from mile markers 134 to 138. Today the main livelihood comes from commercial fishing, sportfishing and tourism. Many people gather at the Ninilchik small boat harbor to watch the colorful commercial fleet come in at high tide and "off load" their catch or travel through town to see the sport fleet `catch of the day". Visitors to Ninilchik will find everything they desire for a perfect vacation, with services for every need.

Trout, salmon and halibut fishing excel here. Three main fishing areas exist -Cook Inlet, Ninilchik River and Deep Creek - all of which provide a fisherman`s delight. Tasty clams abound and may be captured on the beaches during the seasonal low tides.

A walk along the beach to watch the sunset across Cook Inlet at 11pm is an unforgettable experience! However summer is not the only season to enjoy here. Grouse and moose hunting occupy fall months, as does silver salmon and steelhead fishing. Snowmachining, cross-country skiing, sledding, skating, ice fishing and dog sledding are popular pastimes during the clear, sunny winter days. Some businesses stay open all year round and the real "warmth" of the residents takes the chill out of the weather!

Look to the south across Cook Inlet and see the distinctive cone of St. Augustine, one of the active volcanoes of the Alaska range. To the north of it is Mt. Iliamna, showing a wisp of smoke at times; farther north is Mt. Redoubt, which erupted as recently as 1989. To the far north is Mt. Spurr, which roared to life several times in 1992. They`re beautiful to see, but not dangerous as they`re at least 40 miles away!

Whales, seals and sea otters are seen in our waters. Bird watchers will delight in the many species to be seen here. Bald eagles abound and are frequently seen soaring near the bluff. Moose frequent the area all year.

Before the arrival of Europeans in Alaska, Ninilchik was a Dena`ina Athabaskan lodging area used for hunting and fishing. The name Ninilchik probably derives from Niqnilchint, a Deni`ana Athabaskan word meaning "lodge is built place".

The first people who would permanently stay in the village were Russian colonists who moved there from Kodiak Island in 1847 before the Alaska Purchase. They were Russian Grigorii Kvasnikov (Anglicized to Kvasnikoff), his Russian-Alutiiq wife Mavra Rastorguev (daughter of Agrafena of Afognak), and their children. Their dialect[3] of Russian (plus a few words borrowed from Alaska Native languages) was the primary language spoken in Ninilchik long past the purchase of Russia`s interests in Alaska by the U.S. in 1867. A few speakers of the Ninilchik Russian dialect are still alive in 2008, including one married couple who continues to speak the language to each other.