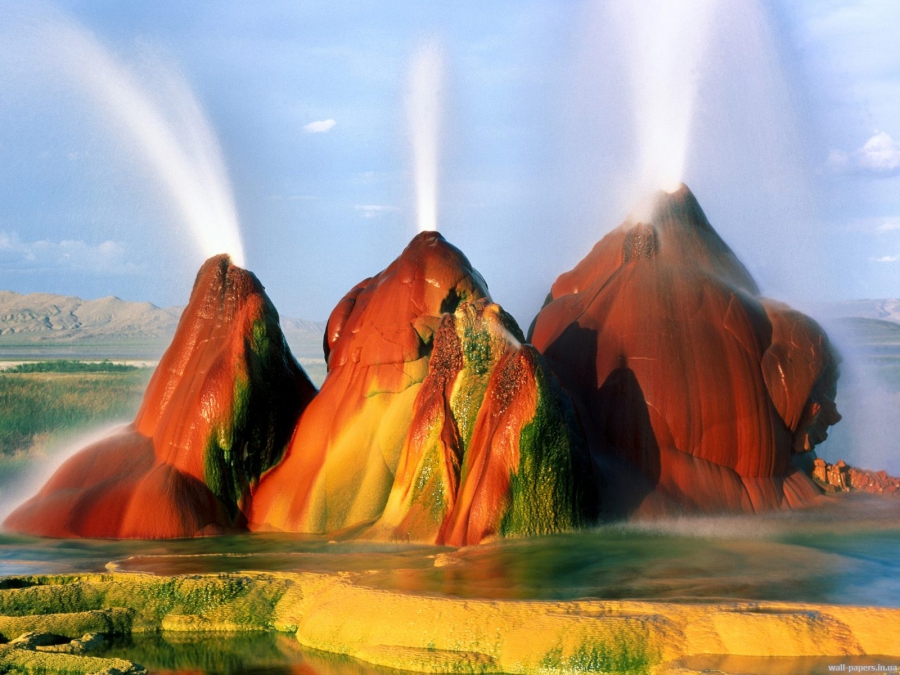 Guide
,
USA
,
Nevada
They look as if they were taken on another planet, or at least on the set of a new and very expensive science fiction movie. Yet these pictures are of the Fly Geyser which is very much of planet earth (Nevada, US to be exact). However – and herein lies the surprise – it is effectively man made.

The geyser can be found in Hualapai Valley near Gerlach. It is a little seen phenomenon as the land upon which it sits is private. It can be seen from State Road 34 but unless you have permission the view from a distance is all you should attempt.

Back in 1916 the owners of the place were looking for water in the hope of creating rich farmland in this desert area of the state. They came across water, yes, and the well worked for decades. However, the drill that was driven down a shaft hit a geothermal pocket of water and the result was a geyser, if not quite made by man then certainly made possible by him.

Yet it is not the geyser you see in the pictures here. In the 1960s the water found another weak spot and a new, natural geyser was created. The older one no longer spouts at all. It is thought that the new geyser somehow diverted its water. Or perhaps it simply waits for another time to come when it can spring in to life again.

Since the 60s the geyser has substantially developed – it now has the appearance of a huge multi-colored sculpture. It sits upon a pulpit of sludge and dirt. Around it ponds of warm water where plant life thrives give it an even eerier off-world look.

The ponds are forming an ecosystem of their own. Small fish (introduced by some unknown human hand) breed in the ponds and they attract a number of birds such as swans, mergansers and mallards.

The odd yet magnificent appearance of the geyser is due to dissolved minerals slowly intensifying and then piling up. This created the embankment upon which the geyser sits and it is what gives the whole structure its size. If you count the mound it is almost four meters in height: without it, Fly Geyser would be less than two.

The water from the geyser is thrust skywards on a continual basis. The spouts of water squirt out two meters in the air, spraying the surrounding thirty or more pools with a fresh source of water. The different mix of minerals (which includes sulphur) reacting with the oxygen in the air help to give the geyser its glorious colors.

The multiple spouts mean that a single cone of enormous size has not been able to develop. Yet the alien looking mound is something quite extraordinary, especially with its myriad of colors. The other factor in the strange coloration of the mound is the fact that it is covered with thermophilic algae which as a heat tolerant microorganism thrives in this sort of hot environment.

Although several organisations have attempted to purchase the land to open it up to the public the owners have resolutely refused. The land remains resolutely private and bordered by a fence. If you are ever in the vicinity then please do not attempt to get past the locked road gate – in Nevada that could have repercussions!

This alien looking geyser on the edge of Black Rock Desert is actually man made. Man made by accident, that is.

There are actually two geysers on the property. The first was created nearly 100 years ago as part of an effort to make a part of the desert usable for farming. A well was drilled and geothermal boiling water (200 degrees) was hit. Obviously not suitable for irrigation water, this geyser was left alone and a 10 to 12 foot calcium carbonate cone formed.

In 1964 a geothermic energy company drilled a test well at the same site. The water they struck was that same 200 degrees - hot, but not hot enough for their purposes. The well was supposedly re-sealed, but apparently it did not hold. The new geyser, a few hundred feet north of the original, robbed the first of its water pressure and the cone now lays dry.

This second geyser, known as Fly Geyser, has grown substantially in the last 40 years as minerals from the geothermal water pocket deposit on the desert surface. Because there are multiple geyser spouts, this geyser has not created a cone as large as the first, but an ever growing alien looking mound. The geyser is covered with thermophilic algae, which flourishes in moist, hot environments, resulting in the multiple hues of green and red that add to its out-of-this-world appearance.

The geyser is on Fly Ranch, is private property and trespassing is illegal. However, if you drive to neighboring town Gerlach and go to Bruno`s restaurant they can put you in contact with the owners who do day tours of the spring for seasonal pricing ($25-$50 a day.)

No camping, no fires.