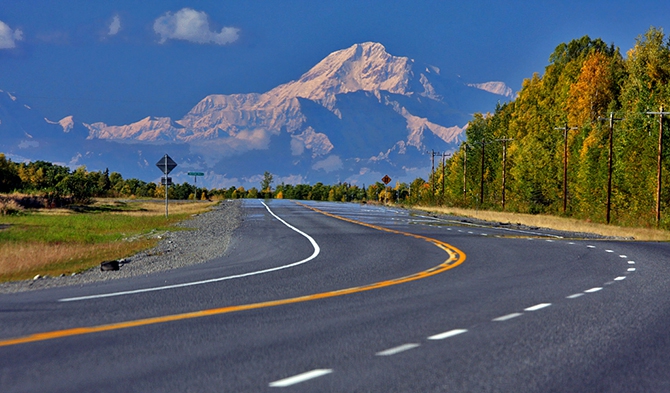 Guide
,
USA
The largest US state is situated in northwestern North America, with coasts on the Arctic and North Pacific oceans and on the Bering Sea, separated from the contiguous 48 US states by Canada. Alaska is one of two US states not bordered by another state, Hawaii is the other.

Alaska is bordered by Canada (by the Canadian provinces of Yukon Territory and British Columbia) to the east, and has a maritime border with Russia to the west. The state`s nickname is "The Last Frontier".

The territory was purchased from Russia in 1867. Admission to the on the 3rd January 1959, it was admitted as the 49th state. After oil was discovered in 1968, a pipeline was completed in 1977 to carry the oil from the North Slope to Valdez.

A petition calling for Russia’s annexation of Alaska that was posted on the White House website gathered more than 35,000 signatures before it was canceled. Many people still think that the Americans either stole Alaska from the Russians or leased it and did not return it. Despite the widespread myths, the deal was an honest one, and both sides had valid reasons to make it.

Alaska before the sale

In the 19th century, Russian Alaska was a center of international trade. In the capital, Novoarkhangelsk (now known as Sitka), merchants traded Chinese fabrics, tea and even ice, which the southern United States needed before the invention of the refrigerator. Ships and factories were built, and coal was mined. People already knew about the numerous gold deposits in the area. Selling this land seemed like madness.
Pilots retrace Alaska-to-Siberia Lend-Lease route

Russian merchants were drawn to Alaska for the walrus ivory (it was as expensive as elephant ivory) and the valuable sea otter fur, which could be procured by trading with the indigenous peoples of the region. Trading was done by the Russian-American Company (RAC), which was started by adventurers — 18th-century Russian businessmen, courageous travelers and entrepreneurs. The company controlled all of Alaska’s mines and minerals, it could independently enter into trade agreements with other countries, and it had its own flag and currency — leather “marks”.

These privileges were granted to the company by the imperial government. The government not only collected massive taxes from the company, it also owned a large part of it — the tsars and their family members were among the RAC’s shareholders.
The Russian Pizarro

The main ruler of the Russian settlements in America was the talented merchant Alexander Baranov.

He built schools and factories, taught the native people to plant rutabaga and potatoes, built fortresses and shipyards, and expanded the sea otter trade. Baranov called himself the “Russian Pizarro” and took a liking to Alaska not only with his purse, but also with his heart — he married the daughter of an Aleut chief.

Under Baranov, the RAC brought in enormous revenue: more than 1,000 percent profit. When an ageing Baranov resigned his duties, he was replaced by the captain lieutenant Hagemeister, who brought with him new employees and shareholders from military circles. Statute now dictated that only naval officers could lead the company. The strongmen quickly appropriated the profitable business, but it was their actions that ruined the company.

More ...
The new masters set astronomical salaries for themselves — common officers earned 1,500 rubles per year (this was comparable to the salaries of ministers and senators), while the head of the company earned 150,000 rubles. They bought fur from the local population for half price. As a result, over the next 20 years, the Eskimos and Aleuts killed almost all the sea otters, depriving Alaska of its most profitable trade. The native people suffered and staged uprisings that the Russians quashed by firing on the coastal villages from military ships.

The officers began to look for other sources of revenue. Hence the trade in ice and tea began, but the ill-fortuned businessmen could not organize this sensibly either, and lowering their salaries was unthinkable. Consequently, the RAC was transferred to state subsidies — 200,000 rubles per year. But even this did not save the company.

Then the Crimean War broke out, and Britain, France and Turkey stood against Russia. It became clear that Russia could neither supply nor defend Alaska — the sea routes were controlled by the allies’ ships. Even the prospect of mining gold dimmed. There was a fear that the British might block Alaska, and then Russia would be left with nothing.

Tensions between Moscow and London grew, while relations with the American authorities were warmer than ever. Both sides almost simultaneously came up with the idea of selling Alaska. So Baron Eduard de Stoeckl, Russia’s envoy in Washington, opened talks with U.S. secretary of state William Seward on behalf of the tsar.

While the bureaucrats were negotiating, public opinion in both countries opposed the deal. “How can we give away land that we have put so much effort and time into developing, land where the telegraph has arrived and where gold mines have been found?” the Russian newspapers wrote. “Why does America need this ‘ice box’ and 50,000 wild Eskimos who drink fish oil for breakfast?” the American press asked indignantly.

The press was not alone in this sentiment — Congress also disapproved of the purchase. But on March 30, 1867, in Washington, D.C., the parties signed the agreement to sell 1.5 million hectares of Russian property in America for $7.2 million, or about 2 cents per acre ($4.74/km2) — a purely symbolic sum. At that time, an unproductive plot of land in Siberia with the same surface area could have cost 1,395 times as much on the domestic market.But the situation was critical — the Russians risked not even receiving this.

The official handover of the land occurred in Novoarkhangelsk. The American and Russian soldiers lined up next to the flagpole, from which the Russian flag started its descent to the accompaniment of a canon salute. However, the flag got tangled at the top of the pole. The sailor who climbed up for it threw it down, and it accidentally landed on Russian bayonets. It was a bad omen! Afterward, the Americans started requisitioning the buildings of the town, which was renamed Sitka. Several hundred Russians who decided not to take American citizenship had to evacuate on merchant ships, and they did not reach home until the following year.

A short time passed, and gold started flowing from the “ice box”: The Klondike gold rush started in Alaska, bringing the States hundreds of millions of dollars. Of course it was insulting. But it is impossible to know how relations between the world’s largest powers would have developed if Russia had not escaped in time from the problematic and unprofitable region, which only talented and courageous merchants, but not navy bureaucrats, could extract revenue from.